JERUSALEM – A Rockefeller is raising capital to rebuild the Jewish Temple, said the news release published on CNN Money's Internet site and other news sources.

The plan would include a united Jewish and Palestinian Arab state. A Jewish group promoting the rebuilding of the Temple was reported to be cooperating.

The story spread virally through the evangelical Christian blogosphere.

But it was all part of an elaborate hoax.

The release, filed with MarketWire and republished at CNNMoney.com, claims "Supriem David Rockefeller" is director of a company, Kinti Holdings group, which is working with a Jewish Temple organization to rebuild the Third Temple. 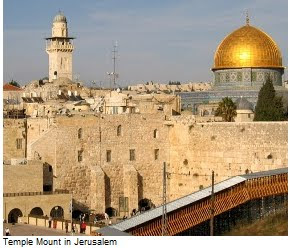 "Kinti Holdings will be raising funds to go towards building the Third Temple in Jerusalem in strict coordinance with The Temple Institute, Rabbi Hiam Richman and The Palestinian National Interest Committee (PNIC) and supporting Husam Bajis for President of Palestine."

Richman, international director of the Temple Institute, a Jewish Temple activist group, told WND the release is a "scam."

"The Temple Institute strongly protests the use of its name and that of Rabbi Chaim Richman in a series of fraudulent press releases and advertising claims that are now circulating on the Internet," read the Temple Institute's official response to the release.

"The claims made by these men ... are false and malicious, and their apparent intentions are to take advantage of the Temple Institute's sincere supporters and rob them of funds. The Temple Institute advises its friends and supporters to avoid being taken in by this scam."

The original "Rockefeller" press release about rebuilding the Third Temple, however, has been spreading like wildfire on Christian websites and blogs.

The release was filed with MarketWire, a leading newswire service. A spokesman for Marketwire did not immediately return a WND request for comment. Is it not uncommon for newswire services to post releases without first fact-checking the content. CNNMoney.com routinely reprints business press releases.

The company that filed the release, Kinti Holdings, has a track record of making strange announcements.

On Monday, Kinti filed a release using the Rockefeller name and claiming it is seeking "a debt/equity swap" with "any and all national brand name corporations."

Another release claimed the company is partnering with "Supriem David Rockefeller" and his "$500 million" worth of entertainment business. The release says Rockefeller is a "financial magnate with strong ties to the entertainment industry."

Yesterday, hours after a WND request for comment on the Third Temple announcement was sent to the sole e-mail address listed for Kinti, the company posted a statement claiming, "Kinti is now conducting Due Diligence of a Major National Brand Name Chain concerning debt for equity and will enter into a mandatory quiet period."

The company claims to own a mine in Guyana, South America, but doesn't specify where the mine is other than pointing to a Google Earth map. The site posts a picture of what it claims is a mining permit from Guyana.

Who is Supriem David Rockefeller?

As for "Supriem David Rockefeller"? A spokesman for the Rockefeller Foundation told WND he doesn't exist.

A routine web search for the name brings up scores of conspiracy websites claiming, among other things, that "Supriem" is a secretive 34-year old heir to the Rockefeller dynasty who is fighting for a New World Order.

One site says it found Supriem really is a con artist and convicted thief who goes by different names and lives in Williamson County, Tennessee.

Some outlandish claims about "Surpiem" include: Rebuilding Third Temple

While the Third Temple press release may be a hoax, the Temple Institute is anything but. The group is involved in restoring a Jewish presence to the Temple Mount, where current Israeli laws bar Jews from ascending the Mount during most hours of the day while Muslims are granted nearly 24-hour access.

The Temple Institute also focuses on preparation for the rebuilding of the Third Temple. The group has been preparing ritual objects suitable for Temple use. Many of the more than 90 ritual items to be used in the Temple have been re-made to the highest standards of the Temple Institute.

The Temple was the center of religious worship for ancient Israelites. It housed the Holy of Holies, which contained the Ark of the Covenant and was said to be the area upon which God's presence dwelt. All biblical holidays centered on worship at the Temple. The Temples served as the primary location for the offering of sacrifices and were the main gathering place for Israelites.

The Temple Mount has remained a focal point for Jewish services for thousands of years. Prayers for a return to Jerusalem and the rebuilding of the Temple have been uttered by Jews since the Second Temple was destroyed, according to Jewish tradition.

According to research by Israeli Author Shmuel Berkovits, Islam historically disregarded Jerusalem as being holy. Berkovits points out in his new book, "How Dreadful Is this Place!" that Muhammad was said to loathe Jerusalem and what it stood for. He wrote Muhammad made a point of eliminating pagan sites of worship and sanctifying only one place – the Kaaba in Mecca – to signify the unity of God.

A guide to the Temple Mount by the Supreme Muslim Council in Jerusalem published in 1925 listed the Mount as Jewish and as the site of Solomon's Temple. The Temple Institute acquired a copy of the official 1925 "Guide Book to Al-Haram Al-Sharif," which states on page 4,

"Its identity with the site of Solomon's Temple is beyond dispute. This, too, is the spot, according to universal belief, on which 'David built there an altar unto the Lord.'"

Preparing for Service in the Rebuilt Temple - Australian IsraelNN.com