Give and Take in Iran

Iran reacted negatively to reports this weekend that the US is building up defenses in the Persian Gulf yet still agreed to send its uranium abroad for enrichment. In the meanwhile, Iran will be executing more of its own people, and still holds hostage three US hikers who accidentally wandered into Iranian territory last summer.

Missile Defenses: Tensions between Iran and the United States were cranked a bit tighter this weekend over US plans to build up its missile defenses in the Persian Gulf. The Obama Administration is reportedly sending in ships armed with missile-targeting capabilities off the coast of Iran, and is also placing anti-missile systems in Bahrain, Kuwait, Qatar and the United Arab Emirates. President Mahmoud Ahmadinejad accused the US of causing weakness and division in the Middle East, and Iranian Parliament speaker Ali Larijani on Tuesday insisted that Iran is no threat to its neighbors.

"America's new puppet show for protecting and implementing security in the region is nothing but a new political trick to pave the way for its presence at others' expense," Larijani said in comments to the house carried by the state broadcaster.

Iran regularly puts on war games in the Persian Gulf and has threatened to hit Western targets if the US or Israel attack Iran's nuclear power plants. 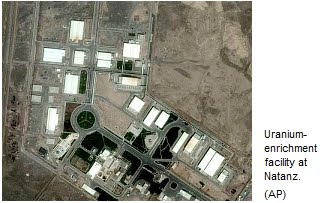 Uranium Enrichment: In the midst of these tensions, after four months of stalling, Ahmadinejad on Tuesday announced that Iran was willing to send its low-enriched uranium abroad for enrichment. He offered a slightly different timetable than the International Atomic Energy Agency, though. Originally, the IAEA plan called for Iran to get the uranium back after a year, but Ahmadinejad agreed publicly to less than half that time.

The plan is geared toward making sure that Iran sticks to using its uranium enrichment for peaceful nuclear power purposes only. The fuel rods Iran would get back would be suitable for nuclear power, but would be difficult to turn into weapons grade material. Sending 70 percent of its uranium out of the country in one batch would also theoretically delay Iran from pursuing a weapons program.

It isn't certain that Iran intends to follow the actual guidelines set up during the six world power talks last October. Ahmadinejad did not mention whether Iran would swap the entire 70 percent of its uranium at one time, as outlined by the talks. He did, however, express a willingness for Western countries to come in and build nuclear power plants in Iran.

"They want to cooperate? OK, we cooperate. We do not have any problem. Let them build 20 nuclear power plants. Is there a problem? Russia, France and the U.S., come and build."

Hikers: January 31st marked six months since three UC Berkeley graduates, Sarah Shourd, 31, Shane Bauer, 27, and Josh Fattal, 27, were arrested in Iran after having accidentally crossed the border while looking for a waterfall. The Americans speak some Arabic, but not the Persian language Farsi. Because the US does not have diplomatic relations with Iran, Swiss proxies have been working to get the Americans released, but have not seen the hikers since October. Two Belgian tourists who were released from prison in December said that Iran was keeping the hikers in solitary confinement. The hikers' families are anxious for their release and have hired a prominent Iranian attorney to represent them, but he has not yet been able to see his clients.

Executions: In the meanwhile, Iran is preparing to celebrate the 31st anniversary of the fall of the Shah on February 11. Leading up to the celebration, Iran has started executing some of the protestors who were arrested after the controversial reelection of Ahmadinejad last June 12. About 4000 people were arrested during the post-election protests, which have continued despite the police crack down.

Tehran's Revolutionary Court gave death sentences to eleven people last month, and two were hanged last week. Nine more will soon be put to death as traitors, and Mir Hossein Moussavi, the Iranian opposition leader is slamming the Iranian leadership for simply continuing the tyranny of the Shah.

"In the early years of the Islamic Revolution, most people were convinced that the structure of the revolution would destroy the past political situation of tyranny and dictatorship, and I was one of them who believed that," said the former prime minister, who acts as the symbolic leader of Iran's protest movement against the current regime. "The current political situation in Iran indicates the presence of the remaining roots of tyranny and dictatorship of the Shah.”

Legislator Hassan Noroozi named Moussavi among three people whom he said "must be arrested" The other two are Mehdi Karrubi, another Iranian opposition leader, and Fa'ezeh Hashemi, daughter of the former reformist president, Ayatollah Akbar Hashemi Rafsanjani.

"They must not remain on the sidelines and be safe," Noroozi said. "Those who issue statements and invite people to create chaos in the streets and attack one another must be dealt with according to Islamic laws."

U.S., Iran not in talks on prisoner swap - Reuters