The official said the Syrian government was debating whether to launch guerrilla warfare and possibly sporadic mortar and rocket attacks targeting the Golan. The attacks would be blamed on an "independent" group operating out of Syria, the official said.

However, Syria apparently has backed down from the plan after Iran expressed interest in using the low-grade attacks to escalate into a larger conflict between Israel and the Iranian-backed Hezbollah militia in Lebanon, the official said. Such a conflict would distract Israel.

The official said Syria is afraid of a large conflict or an outright war with Israel.

"Assad should know that if he attacks, he will not only lose the war. Neither he nor his family will remain in power," Lieberman said last Thursday.

Lieberman was responding to a Syrian threat against Israeli cities one day earlier.

"Israel knows that if it declares war on Syria, such a war will reach its cities as well," Syrian Foreign Minister Walid Moallem said following a meeting last week with Spanish Foreign Minister Miguel Moratinos.

Syria has long demanded the Golan Heights as part of any deal with Israel. The Golan looks down on Israeli population centers and twice was used by Damascus to launch ground invasions into the Jewish state. 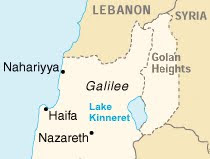 Even when Syria shortly held the Golan, some of it was stolen from Jews. Tens of thousands of acres of farmland on the Golan were purchased by Jews as far back as the late 19th century. The Turks of the Ottoman Empire kicked out some Jews around the turn of the century.

The online Jewish Virtual Library has an account of how in the late 6th and 5th centuries B.C., the Golan was settled by Jewish exiles returning from Babylonia, or modern day Iraq. In the mid–2nd century B.C., Judah Maccabee's grandnephew, the Hasmonean King Alexander Jannai, added the Golan Heights to his kingdom.