Viktor F. Yanukovich - the pro-Russia, pro-Putin opposition leader of Ukraine — has won a tightly contested and controversial election to emerge as his country’s new leader. Current Prime Minister Yulia V. Tymoshenko, one of the leaders of her country’s pro-democracy Orange Revolution in 2005 (which at the time threw Yanukovich out office), apparently lost the election by 3.5%. She accused her rival of trying to steal the election, but has now withdrawn her formal challenge before the Ukrainian Supreme Court. 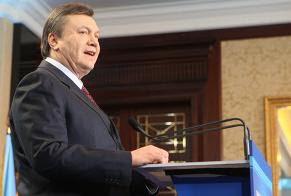 This is not, however, the first time Yanukovich and the Putin regime in Moscow have been accused of being in cahoots to seize control in Kiev. In 2004, U.S. political advisor Dick Morris wrote a column warning that “as an unpaid, volunteer adviser to Viktor Yushchenko, the democratic candidate for president, I have seen, firsthand, how Viktor Yanukovich, the Putin candidate backed by a coalition of the Russian Mafia, oil barons, former KGB officials and communists stole the election and thwarted the obvious will of the voters.

Would-be czar Vladimir Putin has taken a giant step toward reasserting the regional hegemony of the former Soviet Union by stealing the election in Ukraine right under our noses…. Putin regarded the contest as so important that he personally visited Ukraine in the weeks before the election to campaign for his candidate, a clear violation of the most elementary standards of independence and protocol. His former KGB henchmen — and once and future communists — combined with Russian organized-crime figures and oil barons to pump money into the race and to intimidate voters on the ground.”

“The stakes could not be higher. If Ukraine and Russia combine, as Putin clearly wants, the old Soviet Union will be back on the road to regional domination and the old ambitions of global power will return. And 45 million people will be cheated of the right to determine their own future. We, in the West, are at best distracted and at worst willing to cede to Putin regional control in return for his assistance in the war on terror. This is a mistake of the same order of magnitude as the allies made in the 1930s in dealing with Hitler. The theft of the Ukrainian election is parallel to Germany’s decision to march into the Rhineland. And our refusal to notice or act is akin to the French and British policy of turning the other way.”

Pro-democracy forces should be concerned about the direction Ukraine is now headed. So should Jewish and evangelical Christian leaders. The history of persecution against the Jews in Ukraine is long and sordid. But since the collapse of the USSR, Kiev has been reasonably friendly towards Jews and towards Israel. Now, as Kiev moves towards Moscow, concerns of an anti-Israel tack in Ukrainian foreign policy could be coming.

The Church has been growing steadily in Ukraine in recent years. Some of the largest congregations in Europe — with thousands of believers attending every Sunday (as opposed to “big” churches in Europe that attract only a few hundred to weekend services) — are located throughout Ukraine. In 2007, more than 200,000 Ukrainians turned out to hear the gospel from Franklin Graham in the Olympic Stadium. In 2008, Christianity Today called Ukraine “the Bible Belt of Europe” and the “hub” of Christianity in Eastern Europe.

But Ukrainian believers and outsider observers are concerned that Yanukovich will impose draconian restrictions on religious freedom, just as Vladimir Putin and Dmitry Medvedev have done in neighboring Russia. Followers of Jesus Christ need to pray faithfully for their brothers and sisters in Ukraine, and keep advancing the gospel there more than ever while there is still freedom to do so.

What Next After Ukrainian Elections? - Heritage.org (Blog)