Stopping the Terrorist Among Us

Australia's Prime Minister Kevin Rudd issued a long-awaited counter-terrorism white paper on Tuesday warning that the threat of home grown terrorists in Australia has increased. The US Homeland Security Secretary Janet Napolitano made even stronger statements Sunday when she said that in 2009 the terrorist threat shifted from international terrorists to those from within the United States. Whether committed by foreign or domestic terrorists, neither Americans nor Australians want violent attacks carried out on their soil. At the same time, there is concern that efforts to thwart future domestic terrorists will lead to greater infringement on basic freedoms.

After the November, 2008 attacks in Mumbai, India, the Rudd Government of Australia commissioned a white paper to explore the different successes and concerns in fighting the war against global jihadism. The paper released Tuesday defined the country's primary terrorist concern as "a global violent jihadist movement," but also made clear that Australians influenced by "violent jihadist messages" were a growing threat.

The paper offered some successes in the war on terror, but also noted new threats since the last white paper put out by the Howard Government in 2004. For example, Al Qaida in Pakistan and Afghanistan had been subdued significantly, and there had been success in applying pressure to terrorists in Southeast Asia. New sources of tension had popped up in Yemen and Somalia as groups in these countries embraced Al Qaida's message. 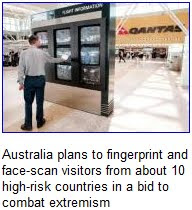 In order to fight the arrival of terrorists from abroad, the Rudd Government plans to put $67 million over the next four years into biometric checks on all visas for applicants from 10 high risk countries. The specific countries in concern have not yet been disclosed. Applicants would need to be fingerprinted and photographed during the application process in their own countries before visas could be issued.

As for those under the jihad influence at home? "Since 2001, we have had 20 convictions and we have had about 40 people whose passports have been refused or confiscated for terrorism reasons," Australian Foreign Minister Stephen Smith told ABC Radio on Tuesday. The white paper did not include extra funding for any programs to target home grown threats, but the government expects terrorism to be a "persistent and permanent" security problem in Australia.

Meanwhile, in the United States, the Department of Homeland Security has turned its attention toward terrorists at home. If attacks like the Christmas Bomber and Fort Hood shooting are the type of concern to Homeland Security, then Napolitano may not just be talking about stopping terrorist sleeper cells in America. Apparently, there is now more fear about Johnny Walker Lindhs running off to Yemen to join terrorist groups, or future Nidal Malki Hasans "going postal" on Army bases, than about foreign terrorists being trained to slaughter Americans.

While we need to take seriously the jihadist threat, we should be wary of any government action that treats every American as a potential terrorist. Most Americans, including Muslim Americans, want to live their lives and raise their families and have no aspirations to blow anybody up. We should not deal with the threat of domestic terrorists in a way that would shave away any more of our liberty in an effort to root out the violent few among us.

So far, John Brennan, President Barack Obama's homeland security adviser, has nailed "community engagement" as a big first step toward thwarting domestic terrorism. On Sunday Brennan brought up a case in which five young Pakistani men from Virginia sought training from Al Qaida in Pakistan. It was the families of these young men that took the initiative to get help and eventually contacted the FBI.

"It's that engagement with those local communities that's going to be the critically important mechanism to detect that radicalization even before they depart," Brennan said. In Iraq during the past many years, US Special Forces have gotten a great deal of their intelligence from the local people. The local Iraqis were very willing to tell about the trouble-makers in their neighborhoods. "The people two doors down are building bombs." The Christmas Bomber, Umar Farouk Abdulmutallab's father warned authorities about his son before the bombing attempt. We do not need to spy on our neighbors. People who know would-be terrorists often already know when something is up.

There is also a place for profiling, despite the political incorrectness of the idea. The fact is, the chances of Grandma hiding explosives in her shoes are pretty remote. As Charles Moore wrote in The Daily Telegraph at the end of January, the point of profiling is not to stop every Middle Eastern-looking person in the airport line – that would not only be a massive waste of time and unnecessary, but obnoxious. The point of profiling is to watch out for people with a lot of high risk behavior, like Umar Abdulmutallab, who bought a one-way trans-Atlantic ticket with cash while carrying little luggage. These are the people who are known to have sympathies for suicide bombers, like Major Nidal Hasan, the US Army psychiatrist who perpetrated the Fort Hood shootings. His known philosophical positions and his extensive email correspondence with Al Qaida imam Anwar al Awlaki should have raised warning flags with Hasan's colleagues, but they did little about their concerns for fear of being accused of Islamophobia.

We do not need to scrutinize every neighbor, and we do not want the federal government scrutinizing each one of us. We certainly do not want people targeted just because they disagree with the government. However, there are certain behaviors that should warn officials about potential terrorist attacks. And while we keep an eye out for shoe bombers and work to keep our teens from running off to join Al-Qaida, we need to remember that international jihadists are still out there, and they have not given up on their desire to take down the West for Islam.

Ultimately, this battle - like so many – is truly a spiritual battle; the weapons of our warfare are spiritual. Jesus told us to pray for our enemies, and that includes those among us who seek our destruction.

Terrorist Risks On The Rise At Home - The Canberra Times

Playing the Numbers Game With Terrorism - The Heritage Foundation