An archaeological team led by Dr. Eilat Mazar has unearthed an ancient wall in Jerusalem that dates back to the third king of Israel, King Solomon, the son of King David, and this team believes this discovery gives proof to the Biblical account of the presence of the Jewish people in Jerusalem 3000 years ago.

Dr. Mazar cited the book of I Kings in the Bible as she explained the archaeological significance of this wall which surrounded the central city of the monarchy, the House of King Solomon and the first Temple of the Jewish people.

The archaeological discovery of an ancient wall in Jerusalem dating back to the Jewish King Solomon is evidence that Bible prophecy will be fulfilled. 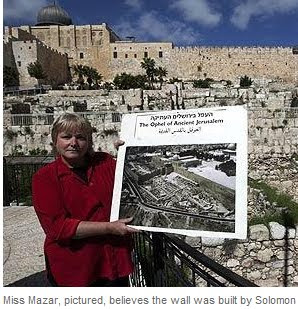 The archaeological dig in the city of David, the original site of the city of Jerusalem, has unearthed important artifacts that give proof of a Jewish presence in Jerusalem back through history. With the recent discovery of a wall between the city of David and the Temple Mount that dates back 3000 years ago, there is further proof of a Jewish presence in the period of the first Jewish Temple. That first Temple was built in the time of King Solomon, the third king of the Jewish people. The fact that this wall is evidence of a Jewish leadership capable of building this massive fortress wall is evidence that King Solomon had the capacity to build the first Temple as well, as is recorded in I Kings 6.

The building of this Jewish Temple 3000 years ago by King Solomon was the first installment of the Davidic Covenant, II Samuel 7, which was God's promise to King David that one of his sons would build that Temple, II Samuel 7:12-13. However, the Davidic Covenant also looked into the future, beyond King Solomon to the last days when another in the lineage of King David, the Messiah, Jesus Christ would build a Temple in Jerusalem and become the King of the Kingdom that will be forever, II Samuel 7:10-16.

The discovery of an ancient wall in Jerusalem dating back to King Solomon is indeed evidence that Bible prophecy will be fulfilled.