Last October there was another in the growing number of Islamic honor killings in the United States when a Muslim in Peoria, Arizona, Faleh Almaleki, got into his Jeep Cherokee and ran down his twenty-year-old daughter Noor, as well as her boyfriend’s mother, Amal Khalaf.

Noor died not long thereafter, and Faleh Almaleki was charged with first-degree murder, aggravated assault and two counts of leaving the scene of a serious accident. But prosecutors announced this week that he will not face the death penalty – it wouldn’t be multicultural.

Faleh Almaleki’s lawyer, public defender Billy Little, requested that the death penalty not be sought in this case because County Attorney Andrew Thomas is a Christian and Almaleki is a Muslim:

“An open process provides some level of assurance that there is no appearance that a Christian is seeking to execute a Muslim for racial, political, religious or cultural beliefs.”

And indeed, the County Attorney’s office ultimately decided not to seek the death penalty, although it denied that Little’s request had anything to do with the decision:

“The defendant is charged with first degree murder and, if convicted, will spend the rest of his life in prison,” said County Attorney Office spokesman Mike Scerbo. “As is in all first degree murder cases, the decision on whether to seek the death penalty is made on a case by case basis. Cultural considerations played no part in the decision not to seek the death penalty.”

This denial, however, did not ring true in light of the calculated nature of Almaleki’s actions:

“By his own admission,” said county prosecutor Stephanie Low, “this was an intentional act, and the reason was that his daughter had brought shame on him and his family. This was an attempt at an honor killing.”

If a cold-blooded, premeditated murder doesn’t warrant the death penalty, what murder does? If the death penalty is to be applied or contemplated at all, one would be hard-pressed to find a case more appropriate than one in which a father murders his daughter freely, not in the heat of passion, and with full intentionality, because she does not share his values. 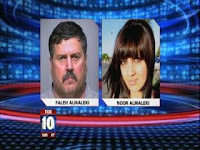 Honor killing is the murder of a wife, daughter or sister by a husband, father or brother in order to cleanse the family’s honor after a sexual indiscretion. Noor Almaleki had enraged her father by becoming “too Westernized” and living with her boyfriend. Honor killing is broadly tolerated in many Islamic countries, and is encouraged by the fact that traditional Islamic law mandates no penalty for a parent who kills a child. Syria and Jordan, among other countries, punish honor murderers more lightly than other murderers, and in Jordan Islamic clerics led the fight against an attempt several years ago to stiffen penalties for honor killing.

This is a human rights issue that ought to merit the attention of anyone who cares for the lives lost to this barbaric practice. Yet American law enforcement officials are doing nothing to call Muslim communities in this country to teach against and work against this practice. And relativist multiculturalists like Billy Little seem to think that taking a strong stand against honor killing would be an illegitimate imposition of Christian values upon a Muslim.

There are larger implications of this decision as well. In my 2008 book Stealth Jihad, I laid out evidence that Islamic groups in the U.S. were working in the courts, businesses, and educational institutions to secure special privileges for Muslims, in accord with Sharia provisions that give them a place above non-Muslims in Islamic societies. And while they have succeeded in local efforts here and there to get special break times in workplaces for prayers, even the most dedicated Muslim Brotherhood entities in America have not yet begun pressuring for the kind of concession that Billy Little handed them.

But they will surely take the hint. For the first time, the idea that all are not equal before the law, but that some are more equal than others, has been given credence by an American court. Despite the County Attorney’s Office denials, a precedent has been set that Islamic pressure groups are certain to exploit to the hilt.

What does the Bible say about the death penalty / capital punishment? - GotQuestions.org