The EU President a Damp Rag?

With the implementation of the European Union's Lisbon Treaty, many of us anticipated that the newly-created position of EU President was going to carry the revived Roman empire of bible prophecy to unprecedented heights of global prominence. Thus far that hasn't proven to be the case, but is the jury still out on the subject? Potentially.

As reported by EUBusiness.com, EU President Herman Van Rompuy got a rude reception when he appeared before the European parliament for the first time on 2-24-10.

British MEP Nigel Farage said the following of him in open session:

"I don't want to be rude but really you have the charisma of a damp rag and the appearance of a low-grade bank clerk. Who are you? I'd never heard of you, nobody in Europe had ever heard of you."

As the parliament began to rain its disapproval of Farage upon him for his obviously disrespectful demeanor, he said:

"Oh I know democracy is not popular with you lot." 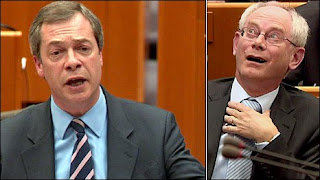 After belittling Van Rompuy handily, Farage admitted that, in spite of appearances, he essentially senses the new EU President to be a wolf in sheep's clothing, a man bent on eliminating the existence of European nation states in favor of what I presume would be something more like the United States of Europe than the present European Union:

"I sense though that you are competent and capable and dangerous, and I have no doubt that your intention is to be the quiet assassin of European democracy and of European nation states."

If Farage's assessment of the seemingly mild-mannered Van Rompuy is accurate, his appearance on the global political stage may be more noteworthy than any of us have suspected thus far. Far more noteworthy!

Bible prophecy paints a clear picture of the final global empire which the Antichrist will someday assume leadership of. Daniel likened it to a dreadful, terrible, exceedingly strong beast with teeth of iron (Daniel 7:7, 19). John, while on the isle of Patmos, foresaw a time coming when the beast empire will place the Antichrist in such a position of power that he will hold sway "over all kindreds, and tongues, and nations" (Revelation 13:7).

Bearing all of the above in mind, I would remind everyone that Satan is a deceiver. As such, we would do well to consider the possibility that things aren't always what they appear to be on the surface here in the end times.

In the Garden of Eden, Satan appeared before Eve in the form of a serpent, which we are told in Genesis 3:1 was "more subtil than any beast of the field which the LORD God had made." The words more subtil, as used in Genesis 3:1, is `aruwm in Hebrew, meaning "subtle, shrewd, crafty, sly, sensible."

EU President Herman Van Rompuy. Is he a damp rag nobody or a silent but deadly assassin whose influence in the revived Roman empire of bible prophecy is going to be transformative? Time will tell.