“President Mahmoud Ahmadinejad said on Tuesday that Iran’s arch-foe Israel was mulling starting a war ‘next spring or summer’ but has yet to make a final decision,” reports Agence France Presse.

“Without specifying whom would be targeted, Ahmadinejad said: ‘According to information we have, they (Israel) are seeking to start a war next spring or summer, although their decision is not final yet.

...But the resistance and regional states will finish them if this fake regime does anything again.’” 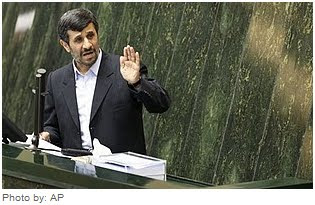 The Iranian leaders comments come as Israel completes a massive new homeland security drill designed to prepare civilians for the possibility of a war with Iran or Syria. Netanyahyu is currently in Moscow for two days of meetings with Putin and Medvedev, trying to engage Russia’s help to avert a war.

Meanwhile, the head of the Israeli Defense Forces said this week that Israel is more peaceful than ever before, but that the peace is fragile and could give way soon to a major regional war. “This is a peaceful time, but this reality is fragile,” Lt. General Gabi Ashkenazi said during a visit to Home Front Command headquarters to watch the ongoing exercise, as reported by the Jerusalem Post. “We have to face the changing nature of today’s wars, changes which caused a threat to the home front and turned it into an operational arena.”