Asked whether Israel must coordinate with the U.S. on any future military actions against Iran's nuclear facilities, Shavit replied, "I don't think that Israel needs American permission when it comes to the survival of Israel." 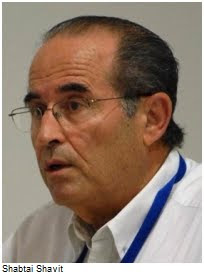 "But I would expect Israel to try to coordinate such a move if push comes to shove," Shavit said.

Shavit, who traditionally shies away from news media interviews, was speaking during an interview on New York's WABC Radio with Klein, who hosts a weekend show on the station.

Shavit posited that Iranian President Mahmoud Ahmadinejad's declaration last week that his country is a nuclear state "proves that the international strategy addressing the nuclear threat until today was completely wrong."

Shavit said he doesn't see a consensus materializing to push through the crippling sanctions that Prime Minister Benjamin Netanyahu has been lobbying for.

Shavit did suggest, however, strong sanctions may still work to dissuade Iran from forging ahead with its nuclear ambitions.

"If there is a consensus among the U.S., Europe, Russia and China, I believe it is still possible to convince the Iranians that for them the price that they will have to pay for achieving the nuclear ways is prohibitive for them," he said.

Asked by Klein whether Israel should strike Iran if sanctions failed and Tehran pressed ahead with its uranium enrichment program, Shavit replied, "I wouldn't like to elaborate too much about this section, but I will only say that a nuclear Iran with the present regime of the extremists' fanaticism – this is a threat of a survival scale."