Health Care Summit - My Way or the Highway

The man who occupies the Oval Office spent his closing remarks of the so-called bipartisan summit on health care belittling all ideas except his and his party's. He asked, somewhat rhetorically,

"Is there enough serious effort that in a month's time, or a few weeks time, or six weeks time, we could actually resolve something? And if we can't, then I think we have got to go ahead and make some decisions. And then that's what elections are for."

There is a lot in these 48 words. First, this is political jargon for telling those opposed to socialist health care that the man in the White House is saying, "Its my way or the highway." 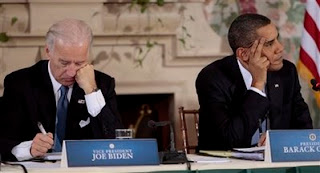 The American people are aligning against Congress and the White House on socialized health care. The Democratic Party is receiving signals from its boss that it should use its supermajority to ram the socialization of over 10 percent of the economy through Congress and into law. "And then, that's what elections are for." Well, elections are brewing right now. There are efforts in New Jersey and other states to recall senators who vote for such legislation - meaning that if the recall efforts are successful, senators who are not up for reelection would have to stand for reelection early. As these efforts mount, election day may come early for many who take the course set by the Oval Office.

Perhaps Americans looked upon these leaders as the Lord looked upon Israel in Ezekiel 22:30, saying,

"And I sought for a man among them that should make up the hedge, and stand in the gap before me for the land, that I should not destroy it: but I found none."

Obama Approval Down to 44%... - Rasmussen Reports

Morning Bell: Someone Needs to Tell the President His Health Care Plan is Dead - Heritage.org (Blog)

In Gamble, Obama and Dems Prepare to Ram Health Care Through - FOX News