The Bible in Kentucky and Pagans in Colorado

The Air Force Academy in Colorado Springs has campus worship areas for Protestants, Catholics, Jews, Muslims and Buddhists. It is now adding a worship area for Wiccans, Druids, and other Earth-worshiping religions on a hill above the campus. In the meanwhile, the Kentucky state senate prepares to vote on a bill to put Bible education in high school classrooms. These developments possess politically correct aspects, but they are also part of a greater spiritual battle for the souls of human beings. 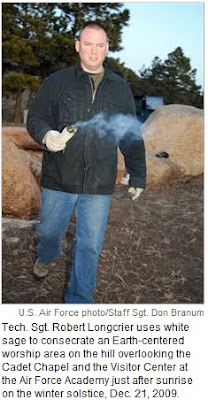 Colorado: Religious liberty is one of the great and vital freedoms protected by the US Constitution. People of all faiths can come to America and practice their religions, as long as they do not sacrifice animals or break other laws. "All faiths" these days include Wiccans, Druids, and other pagans - in large enough numbers, apparently, for the Air Force Academy to permit space to be set aside for their rites and rituals. Inner and outer rings of stones will be formed on a hill overlooking the campus.

Do Druids and Wiccans have a right to worship openly in America? Yes, they do. Does that mean that all religions are equal? No. The Bible is full of warnings against pagan religions and the worship of the created thing rather than the Creator (Rom. 1:23-25, Deut. 4:14-24) and clearly forbids engagement in any kind of witchcraft (Deut. 18:9-12). While they are promoted as gentle and nature-loving, the "gods" and "goddesses" of paganism can be very dangerous, deceptive spiritual entities.

Yet, the American government does not tell people which gods to serve, and the US Air Force Academy is providing a place for Wiccans to worship. We'll get back to that.

Kentucky: In Kentucky, the tide is washing in the other direction as the state senate considers how Kentucky's public high schools might legally teach courses on the Bible as literature. The purpose of bill SB142 is to establish guidelines for classes that would teach students about the Bible's literary structure and its influence on "literature, art, music, mores, oratory and public policy."

If taught legally, these classes will not be Christian Bible studies, but will have the secular purpose of educating young people about the literature and history of the Bible with no judgment about the truth of any of it. According to David Boswell (D- Owensboro), the primary sponsor of the bill, "Simply put, the Bible is the most influential book ever written." He says the class would "teach students knowledge of biblical content, characters, poetry and narratives that are prerequisites to understanding contemporary society and culture."

All faith-based issues aside, a knowledge of the Bible is vital for a well-rounded education. Allusions to the Bible fill Western literature from Shakespeare to Steinbeck, not to mention music, history and politics. Ignorance of the Bible equals ignorance of a great deal of Western culture.

Those in opposition to the bill have sprouted up anyway, concerned that a Bible as literature class in conservative Kentucky is really just a back door for religious indoctrination at the taxpayers' expense. F. Kagin, national legal director of American Atheists, is worried about this and other similar legislation that has "been popping up all over the country."

"Why are they doing this?" he asked. "Why not teach courses about the history of the Babylonians and other peoples and civilizations of the time? It is an attempt to teach the entire Bible as truth."

From a Christian perspective, there should be concern the other way, that the classes will be watered down and dried up, that the Bible will be presented as simply a book of Christian and Jewish myths. The specific curriculum chosen can make a major difference in how the Bible is treated in classroom study. Boswell is right - the Bible is the most influential ever written, and all sides should favor getting young people exposed to it in-depth. If it is truly the Word of God as we believe, then it is quick and powerful and able to touch the hearts of its readers, even in a simple literature class. Atheists who do not believe the Word of God is alive should welcome a class in which students' education is broadened to include the biggest best seller of all time.

Against the Gates of Hell

These relatively small developments in two different states present a bigger picture than just rock circles and literature classes. There are real spiritual battles going on that reach far beyond state legislatures or school boards. The real battle, the one that affects all the ones in the public sphere, is fought in our prayer closets, on our knees, where we wrestle for the life of this nation – for our families and neighborhoods – one prayer at a time. God is the One who can change the hearts of human beings, even avowed atheists like Edwin F. Kagin or the Druids and pagans planning their rituals above the Air Force Academy in Colorado Springs.

We are not going to stop the spread of Earth-worshiping religions by outlawing them. The very religious freedom that allows pagans to worship openly is also that which allows us to spread Christianity freely. Jesus himself never forced anybody to follow him; his disciples were always free to come and go as they wished. Yet, when crowds of people left him and Jesus said to the 12 disciples, "Will ye also go away?" Simon Peter answered him, "Lord, to whom shall we go? thou hast the words of eternal life," (John 6:67-68).

For those of us who know and love Jesus Christ, there is nowhere else we can go. We cannot force other people to follow Jesus, but, we can pray that the Holy Spirit shines in their hearts to give them the light of the knowledge of Christ (2 Cor. 4:6). May He do so in our homes and in our churches, in our public school literature classes, and even on top of rocky hills despite the efforts of Satan to deceive. May God reign in America through the hearts and lives of His people.