What Oil Shortage? World Is Swimming in It

Within the next few years, Iraq is positioned to rival Saudi Arabia by bringing its oil production to 11 million barrels a day, once again proving that "peak-oil" hysteria is just another hoax, Jerome Corsi's Red Alert reports.

Scientists for the U.S. Geological Survey have also suggested Venezuela's oil reserves may double the reserves in Saudi Arabia.

"Both announcements cast further doubt on the peak-oil theory, the idea that world consumption is exhausting the earth's available supply of oil," Corsi wrote.

Occidental Petroleum along with two international partners – one from Italy and the other from Korea – signed a technical agreement last week to develop the massive 4 billion-barrel Zubair oil field in Iraq, near Basra. 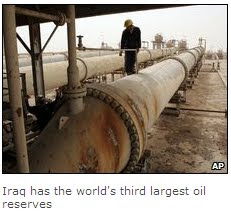 With an anticipated investment of $20 billion over the next 20 years, Occidental and its partners plan to ramp up the Zubair field's production to 1.2 million barrels a day within six years, up from the current production of about 200,000 barrels a day.

The Zubair oil field is only one of several giant oil fields in Iraq that Iraq is planning to develop in the next few years.

The Los Angeles Times reported that a consortium involving Russia's OAO Lukoil and Norway's Statoil has been signed to develop the huge West Qurna Phase 2 oil field that holds an estimated 12.9 billion barrels of oil.

The Iraqi government is also on the verge of signing yet a third contract, this one to develop the Halfaya field, with its estimated 4 billion barrels in reserves.

Scientists working for the U.S. Geological Survey have announced a new estimate that Venezuela's Orinoco belt region may hold twice as much oil as previously thought, BBC News reported.

"Knowing the potential for extractable resources from this tremendous oil accumulation, and others like it, is critical to our understanding of the global petroleum potential and informing policy and decision makers," said USGS Energy Resources Program Coordinator Brenda Pierce. "Accumulations like this one were previously very difficult to produce, but advances in technology and new understandings in geology allow us to assess how much is now technically recoverable."

USGS scientist Christopher Schenk explained, "Heavy oil is the type of oil that is very thick and therefore does not flow very easily. As a result, specialized production and refining processes are needed to generate petroleum products, but it is still oil and can generate many of the same products as other types of oil."

Now that Mexico has found the Tiber field, yet another 3 billion-barrel oil field in the Gulf of Mexico, Moncrief is betting that the secret is drilling deeper than conventional "fossil-fuel" petro-geologists typically drill.

The USGS estimates that worldwide consumption of oil was 85.4 million barrels in 2008.