From time to time, I log-on to Brian McLaren’s website. He is of course (I just typed “curse”!) the Emergent writer and speaker.

Sadly, he is in Israel now, until January 28; this doesn’t bode well for Israel in mainline and Emergent circles, who will have their Israel-bashing clubs strengthened by McLaren’s reports. They will have heavy doses of Palestinian suffering, with a sprinkling of “concern” for Israel’s security. 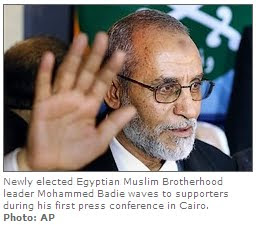 McLaren’s visit coincides with several interesting developments in the region, including the ascension of Muhammad Badee as head of the Muslim Brotherhood in Egypt. Badee is “conservative,” which means he embraces the extreme views of this extreme group, which is spiritual father to Al-Qaida.

More disturbing news from Egypt is the assessment of military chiefs who warn Prime Minister Benjamin Netanyahu that the Sinai is “porous,” meaning, terrorists are smuggling weapons at an alarming rate. Israel is confronted with constructing some sort of barrier there.

In the north, Syria has been emboldened by warmer ties with Turkey and Iran. And if anyone thinks Iraq in the east will be a peace partner better get a clue.

But I doubt McLaren will address these concerns. He will focus on the plight of the Palestinians, the foot-dragging of the Israelis, etc. Christian leaders like McLaren, Stephen Sizer, Tony Campolo and others routinely denigrate the Jewish state and her supporters, particularly Christian Zionists.

Also, a new report by Human Rights Watch bashes Israel, criticizing the country for actions in Gaza, to root-out the Hamas killers. It is popular for such groups to lump Israel with the worst form of terrorism.

"Local and international human rights groups working in Israel have experienced a more hostile climate than ever before after documenting abuses committed by Israel, as well as Hamas, during the December 2008-January 2009 fighting in Gaza and Israel in connection with Israel's ongoing blockade of Gaza," according to Kenneth Roth, executive director of HRW.

Back to McLaren. A new posting on his website is a guest blog from Greg Barrett; note the bias:

“Seeing the infamous Wall built by Israel to imprison the Palestinians, I was reminded of Saul Alinsky’s Rules for Radicals: A Practical Primer for Realistic Radicals. In it, Alinsky writes about ‘the rules pertaining to the ethics of means and ends.’ First among them is the belief that a person’s concern with the ethics of a social action correspond to one’s distance from the consequences of action or inaction. Alinsky quotes seventeenth-century French philosopher La Rochefoucauld, who concluded, ‘We all have strength enough to endure the misfortunes of others.’”

Barrett refers to the “infamous” wall (which is in reality a security barrier). He writes of the intent of the Israelis to “imprison” Palestinians.

Both charges are absurd, yet they make hay with certain American Christians who are already predisposed to anti-Semitism or what is more gently termed “Anti-Zionism.”

Further, McLaren, Barrett, and their friends of course refer to the region they are visiting as the “West Bank,” the term coined by Muslim dictator King Hussein of Jordan. Anything to erase the Hebrew history (in the Bible, the area is known as Judea and Samaria).

Barrett’s invocation of La Rochefoucauld also serves to make his high-brow friends giddy with intellectualism. It enables one to move away from a straight-forward reading of the Bible. This mindset infects seminary students, as well.

This kind of exercise makes it more difficult for a person to, say, simply take at face value to remarkable prophecies of Deuteronomy, where God tells the Jews exactly what will happen to them, even up to the “last days.” When we love philosophy and intellectual rabbit trails more than the Word of God, we don’t hear Him.

And that’s how a Christian pilgrim in Israel misses the breathtaking miracle of the rebirth of the Jewish nation, and instead chums around with those who seek to kill her.

Not a smart move.

What is the emerging / emergent church movement? - GotQuestions.org