Refusal of the current American presidential administration to acknowledge that God has any say one way or the other in the affairs of man, much less any business meddling in the conduct of the American state department's dealing with Israel and its antagonists, is a foregone conclusion. After all, Mr. Obama has himself stated that America is not a Christian nation.

I must say that I agree with this president on that one point. The United States was never a "Christian" nation, in the sense that America turned en masse to total commitment to following Jesus Christ. That has never happened. However, this country, since its earliest stages of planning by the founding fathers, has had woven into its national documents of inception Judeo-Christian principles of God's prescription for conducting life and government.

Based upon that easily provable truth - because all one has to do is to cursorily scan the founding documents to understand biblical influence - it's easy to know that America is a nation under providential watchfulness, to say the very least. God, in starkly plain language, spoke through prophetic omniscience to what will happen when anyone, be it individual or corporate, deals treacherously with His chosen people. Therefore, for anyone - including the president of the United States or any other member of the government of this nation - to ignore what is said about interacting with Israel in the Bible, from which the founding fathers so obviously gleaned wisdom to form this nation, is foolhardiness.

I realize stating that governmental leaders don't recognize God in their governing isn't a profound revelation, because all of humanistic government ignores the Creator of all things. I just wanted to get the fact stated as to the real crux of the problem regarding lack of lasting peace in the Middle East and the world. The administration and the state department, it is obvious, gives God's Word on the matter of Israel no weight whatever in considering policy toward the Jewish state. They forge ahead, setting timelines for producing a two-state solution to the "Palestinian problem" as they see it. 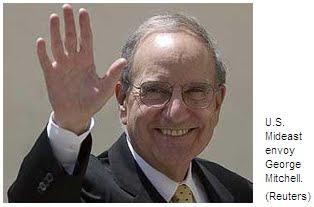 Mideast envoy George Mitchell recently stated that he saw the problem of Israel's making peace with Palestinian leadership as something that must be done within two years. The former senate majority leader, chosen by President Obama to deal with the differences between the Palestinian Authority and Israeli leadership, made it clear how he - thus, how the Obama administration - views the hold-up to peace in the region.

Mitchell said, in an interview with acclaimed broadcaster and interviewer Charlie Rose just prior to Mitchell's departure for Israel, when asked what leverage the U.S. has to get Israel to comply with Arab and international demands, "Under American law, the United States can withhold support on loan guarantees to Israel."

Although a senior state department faux pas fireman, speaking with anonymity, said that Mitchell's remarks were not meant as threats to Israel if compliance with American and international concession demands were not met, Israeli leadership wasn't buying. Israeli Finance Minister Yuval Steinitz bluntly let it be known that Obama, Mitchell, and the U.S. State Department could keep their money. He said that Israel wouldn't be needing loan guarantees because Israel wouldn't be borrowing. The Jewish state, he said, had already raised enough money for foreseeable needs.

All of the back-pedaling the Obama Administration can do cannot obfuscate the truth. It is trying to hide its disdain for Israel's perceived obstinacy in preventing this president from having a clear pathway to establishing the desired two-state configuration.

U.S. Secretary of State Hilary Clinton recently praised Israel's decision to unilaterally make a gesture of good will toward the Palestinians by implementing a partial freeze on establishing new settlements. However, Israel is always met with intransigence when dealing with the Palestinian Authority, as with most all among the Islamic community. The Israeli leadership is growing weary of the one-sided abusiveness, and of the pressures from the American and international leaders who insist Israel is the problem in disrupting the "Roadmap to Peace."

Israeli Prime Minister Benjamin Netanyahu, in expressing his feelings on the matter, said, "It is the Palestinian Authority that needs to change its ways - certainly not the Israeli government."

Israel's decision to go ahead with settlements then brought immediate, not-so-veiled threats by envoy Mitchell. There is no doubt that the former senator's tone and remarks reflect the mindset of the president and those around him. They see the Jewish state as the holdup to Obama getting glory from making the perpetually elusive peace the international community seeks.

To answer the question within the article's title - "Israel betrayed by the U.S.?" - it seems for now that substantial influence within the U.S. Congress is saying, "No."

Visiting senior US senators told their Israelis hosts on Sunday that they disapprove of the Obama Administration's attempt to pressure Israel by threatening to withhold aid, and vowed they would never let that happen.

Senator John McCain told a Jerusalem press conference that he expects President Barack Obama to explicitly announce that his administration is not planning to alter America's policy regarding financial aid to Israel.

Senator Joe Lieberman promised that even if Obama did try to use US financial aid as leverage, Congress would never approve such a measure.

If America joins the rest of earth's nations in the gathering against Israel, as prophesied by Zechariah in Zechariah12:1-3, her betrayal will mean America's doom. All nations who come against the Jewish state, God says, will be cut to pieces. Israel, on the other hand, will remain no matter what, the God of heaven declares in the strongest possible terminology.

"This is what the Lord says, 'He who appoints the sun to shine by day, Who decrees the moon and stars to shine by night, Who stirs up the sea so that its waves roar - the Lord Almighty is His Name; Only if these ordinances vanish from My sight,' declares the Lord, 'will the descendants of Israel ever cease to be a nation before Me'" (Jeremiah 31:35-36).