The earthquake that struck the nation of Haiti was so destructive that it has taken several days for the world to get a grasp of what has happened. The trembler was a monster by historic standards. The quake killed an estimated 200,000 people. So far, 150,000 bodies have been buried in mass graves by a UN recovery operation. The total does not account for corpses buried by relatives or bodies yet to be found. 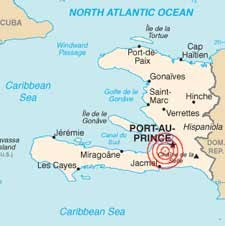 I could tell right away that it would be a major event. The seismic event hit a perfect bull’s eye, with a 7.0 magnitude, a depth of only three miles, and a location only nine miles from the Haitian capital.

In the book of Mark, Jesus warned that the last days would be the tail end of an exponential surge of activity. The Lord mentioned a great variety of signs, then He said these signs will be like "birth pangs."

"For nation will rise against nation, and kingdom against kingdom; there will be earthquakes in various places, there will be famines; this is but the beginning of the birth-pangs" (Mark 13:8 RVS).

I strongly believe the Haitian disaster is part of the end-times birth pangs. We are now at a point of seeing many earthquakes at record-high levels. Just look at the last ten years: It was just few years ago that a great quake struck Indonesia. That event generated a tsunami that killed 270,000 people. The last time we had a death toll of 200,000 was in 1976. The one previous to that was in 1927. The time gap shows the birth pang increase. Working backwards, we have a time gap of 5, 29, and 49 for those three events.

Normally, we could say by the frequency of earthquakes in the past that it will be many years before we suffer another super quake. There have been times when there weren’t ever major quakes. The Rapture Ready Earthquakes Timeline shows that between 1950 and 1960, there was no major loss of life from seismic activity. There was another gap between 1960 and 1970.

Some people might say the death toll is going up because the population has increased over the years. That is a factor, but you can’t account for a rapid increase in deadly quakes. The one that caused greatest loss of life actually occurred 454 years ago. In 1556, a quake in Shansi, China, killed 830,000 people.

I don’t think we are going to see any let-up in the number of destructive earthquakes. We have reached the point at which every year is visited by some form military conflict, economic unrest, or natural disaster.

Last week, Pat Robertson generated an uproar after he said the Haiti earthquake was the result of the Haitian people making a pact with the devil. I tend to agree with Robertson that there is a demonic reason for why Haiti has been hopelessly linked to calamity; however, it was very poor timing to blame people while they are suffering. One of the most fundamental rules of any organization is to do no harm to your own cause. Robertson has repeatedly violated this common-sense principle. His remarks have given plenty of fuel to anti-Christian liberals and late-night comedians.

Jesus was told about some worshipers from Galilee who were killed by Pilate and how Pilate put their blood in with the blood of their sacrifice. Jesus didn’t say, "They were pagans, so they got what they deserved." He said,

We should look at the Haiti earthquake as a warning of our own need to be ready for eternity. The hour is late; the rapture is imminent. It could literally take place at any moment. As we see the birth pangs occurring, we need to be focused on the “now.”

EARTHQUAKES: ON THE INCREASE? OR WARNING OF JUDGMENT TO COME? - LDolphin.org (Gordon Franz)