We Will Never Forget!

Prime Minister Benjamin Netanyahu at a ceremony marking 65 years since the liberation of the Auschwitz concentration camp, said: "We have gathered here, Poles and Jews, at the crossroads of tragedy. Our long shared history included tremendous cultural accomplishments and the lowest low humanity has experienced. We were here. We remember those who froze to death; if they did not freeze to death, they were executed by gas, burned in the ovens. We remember also that one-third of the Righteous Gentiles, those who risked their lives and their children’s lives and those of their families in order to save others, were Poles. We remember all this…

To those who were murdered here, and to those who survived the destruction, I come from Jerusalem today with this promise: We will never forget! We will never permit those who desecrated this monument to death to distort or wipe away your memory. … 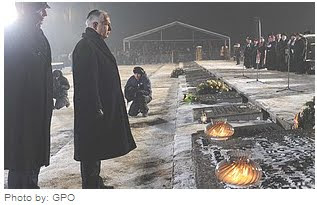 The most important lesson of the Holocaust is that a murderous evil must be stopped early, when it is still in its infancy and before it can carry out its designs. The enlightened nations of the world must learn this lesson.

We, the Jewish nation, who lost a third of our people on Europe's blood-soaked soil, have learned that the only guarantee for defending our people is a strong State of Israel and the army of Israel. We have learned to warn the nations of the world of approaching danger but at the same time to prepare to defend ourselves.

God says: I have posted watchmen on your walls, O Jerusalem; they will never be silent day or night. You who call on Yahweh, give yourselves no rest, and give him no rest till he establishes Jerusalem and makes her the praise of the earth. Yahweh has sworn by his right hand and by his mighty arm: "Never again will I give your grain as food for your enemies, and never again will foreigners drink the new wine for which you have toiled; but those who harvest it will eat it and praise the Yahweh, and those who gather the grapes will drink it in the courts of my sanctuary.…They will be called the Holy People, the Redeemed of Yahweh; and you will be called Sought After, the City No Longer Deserted (Isaiah 62:6-12).

The Jerusalem Connection says: Noticeable for its absence from his State of the Union message was any reference by President Obama to Israel or the Palestinians. Nevertheless, Jews world wide remembered this week the Holocaust Memorial Day and those whose diabolical commitment to replicate it by “wiping Israel of the map.” We are exhorted to “pray for the peace of Jerusalem” (Psalm 122:6). As a prelude to that prayer we should first pray, “O God, do not keep silent; be not quiet, O God, be not still. See how your enemies are astir, how your foes rear their heads. With cunning they conspire against your people; they plot against those you cherish. "Come," they say, "let us destroy them as a nation, that the name of Israel be remembered no more." With one mind they plot together; they form an alliance against you - … Cover their faces with shame so that men will seek your name, O Yahweh. May they ever be ashamed and dismayed; may they perish in disgrace. Let them know that you, whose name is the Yahweh — that you alone are the Most High over all the earth (Psalm 83).

Why did God allow the Holocaust? - GotQuestions.org