State of the Union Indicates Time for Biblical Correction

The message that the man who occupies the Oval Office wanted the American public to hear was: "we got your message." And perhaps he and the houses of Congress controlled by his party did "get" what the American people are saying. But the arrogance of Washington, DC's exclusive club of politicians and their collective goal of a one world order humanist socialist nation are driving them to do what they want anyway. Freezing spending, for example, is a great thing to say to get people off your back, but what they don't tell you is that a non-military, non-social security, non-medicare spending freeze only will save about 1% of the mounting budget deficits. 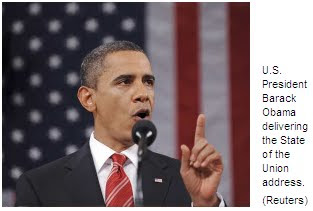 The "no new income tax" pledge is admirable, but what they don't tell you is that spending programs by the government will increase the burden on taxpayers in other ways. For example, the socialized health care plan being jammed through Congress will increase the federal budget in the near term by a trillion dollars - exponentially more over the long term. There are numerous "hidden taxes" in the health care plan, and you will be forced to pay for health care insurance whether you want it or not. Those of you who have really good health insurance will be forced to pay several thousands of dollars per year in penalties for having that plan. Its unpopularity is forcing Congress to find other ways to pass it.

In his State of the Union address, he said regarding his fiscal policy, "Let's try common sense. A novel concept." And he talked about reining in government spending and debt. Sounds good. The American people want their government to live within its means, like every family in this country does who balances a checkbook. Within 24 hours of these remarks, the New York Times reported, "The Senate voted on Thursday to raise the nation's debt limit to $14.3 trillion, a $1.9 trillion increase that would allow the government to keep borrowing to cover operations beyond the November election and into early next year." You know, that raises the debt of every American citizen to the government to over $40,000 each.

A fact check by AP indicated that OOO lied to the American people in his State of the Union address no less than five times. There were several more half truths and misleading comparisons. This is a government of "Tell them what they want to hear, then do what you want to do." This is a far cry from the Declaration of Independence which says that our government should derive its, "just powers from the consent of the governed."

"All scripture is given by inspiration of God, and is profitable for doctrine, for reproof, for correction, for instruction in righteousness."

It is now time for national reproof, correction and instruction in righteousness.

Obama refers to himself 114 times in SOTU speech - Examiner.com

Reaction Roundup: Heritage Responds To The State Of The Union - The Heritage Foundation