So declared Prime Minister Binyamin Netanyahu as he spoke at Auschwitz-Birkenau on Wednesday, the 65th anniversary of its liberation.

Netanyahu used his speech at the notorious death camp to nudge what he referred to as "the enlightened nations of the world" to recognize that "murderous evil" has to be stopped as early as possible to prevent it from achieving its aims. Unfortunately, the events of the past week show clearly that evil is on the march, and "the enlightened nations of the world" are on a coffee break from enlightenment.

As Netanyahu addressed the world from the site of the most prolific genocide factory in human history, at the place where over a million Jews were gassed, starved, beaten, raped, frozen, shot and hanged and then burned in ovens, Iran's leaders were declaring loudly that they intend to finish what the Nazis started. They will destroy the Jewish people.

Iran's dictator supremo Ali Khamenei used a photo-op with Mauritania's President Mohammed Ould Abdel Aziz - who cut his own country's diplomatic ties with Israel last January - to renew his pledge to commit yet another Holocaust. As he put it, "Surely, the day will come when the nations of the region will witness the destruction of the Zionist regime... When the destruction happens will depend on how the Islamic nations approach the issue." 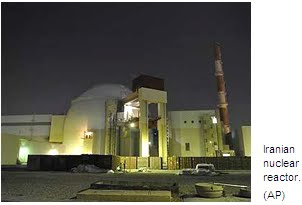 And as he spoke, the ability of "the enlightened nations of the world" to deny that the Iranian regime is building a nuclear arsenal was finally and utterly wiped away. On Monday, Germany's Der Speigel reported that evidence gleaned from document intercepts and from the testimony of two senior Iranian defectors who were involved in the Islamic Republic's nuclear program, proves beyond a reasonable doubt that Iran's nuclear program is not a peaceful one. The Iranians are designing and building nuclear warheads for their Shihab-3 ballistic missiles. According to a summary of the findings now circulating through the halls of power, Teheran will have the wherewithal to build nuclear warheads by 2012.

So the Der Spiegel report showed that Iran is developing the capacity to carry out a second Holocaust in under a hundred years. And yet, in the face of their sure knowledge that evil is on the march, as they did 70 years ago, the "enlightened nations" of Europe are siding with evil against its would-be victims.

On a popular level, as Sunday's release of the Jewish Agency's annual report on global anti-Semitism documented, there were more anti-Semitic attacks in Europe in 2009 than there had been in any single year since the Holocaust. The report stated that the attacks were carried out by Jew-haters on both the Left and the Right.

Europe's anti-Semites wasted no time in proving the report was accurate. On Monday, Polish Catholic Bishop Tadeusz Pieronek said that Jews have "expropriated" the Holocaust as "a propaganda weapon." Jews, he claimed, "enjoy good press because they have powerful financial means behind them, enormous power and the unconditional backing of the United States, and this favors a certain arrogance that I find unbearable."

Then we have the political alliance of leftist anti-Semites with Muslim anti-Semites. Together they not only attack Jews, they provide political cover for expanding those attacks by rejecting Israel's right to exist and justifying violent attacks against Jews outside Israel as the logical outcome of their politically correct anger at Israel for refusing to destroy itself. Case in point is Ilmar Reepalu, the mayor of Malmo, Sweden.

Malmo is one of the most dangerous places for Jews in Europe. The city's small Jewish population is fleeing. The situation in Malmo was graphically demonstrated last March when Israel's tennis stars Amir Haddad and Andy Ram faced off against Swedish rivals at a Davis Cup tie in Malmo and Swedish authorities closed their game to the public. Malmo's Muslim residents and their post-Christian partners on the Left threatened to attack them. Malmo's authorities didn't think it was their responsibility to protect their Israeli guests. So Haddad and Ram were forced to play in an empty stadium.

Interviewed in a local paper this week about the rise of anti-Semitic attacks in his city, Reepalu blamed Israel. In his view, the violence against Jews in Malmo by the far Left and Muslims, "spilled over from Gaza."

By his lights the Jewish national liberation movement is just as bad as the Jewish annihilation movement. As he put it, "We accept neither Zionism nor anti-Semitism. They are extremes that place themselves above other groups they think are less important."

Reepalu then blamed Malmo's Jews for their victimization by his fellow leftists and his Muslim comrades. As far as he is concerned, the Jews brought the violence on themselves last March when they responded to Haddad and Ram's treatment by holding a demonstration supporting Israel. In his view, Malmo's Jews need to separate themselves away from Israel, not support it.

Since the Holocaust, old-style right-wing anti-Semites in Europe have had a hard time getting political traction for their desire to see Jews suffer. But by conflating Jews with Israel, their colleagues on the Left have made sticking it to the Jews, our state and our supporters the easiest way to score political points. So it was that in her first speech as the EU's new foreign policy chief, Britain's Catherine Ashton went out of her way to condemn Israel for building in Jerusalem, closing its border with Hamas-controlled Gaza and defending itself from Palestinian terrorists in Judea and Samaria.

As for Israel's friends, they are hounded, driven out of Europe and where possible placed on trial. Dutch MP Geert Wilders, the head of the Netherland's Freedom Party, is one of Israel's greatest supporters in Europe. Today Wilders is on trial for publicly criticizing what he views as the endemic anti-Semitism of the Koran.

Against the backdrop of the persistence of right-wing Jew hatred, and the politically ascendant Red-Green alliance of anti-Semites, it makes sense that Europe will not raise a finger to prevent another Holocaust.

With Europe out, and with "enlightened" Asian, African and South American countries never really in the game, the only "enlightened" country that might be expected to stop murderous evil before it can carry out its aims is the United States. But unfortunately, like the Europeans, the Americans don't feel like being responsible. President Barack Obama, his administration and many of his fellow Democrats would rather take on Israel.

This week 54 Democratic members of Congress wrote Obama a letter asking him to apply pressure on Israel to remove its restrictions on the import of goods - including dual use goods like construction materials - to Hamas-controlled Gaza. Never mind that under US law it is legally problematic to provide any aid, (including the $300 million Obama has pledged) to Gaza in light of the fact that it is controlled by a terrorist organization.

For its part, the administration apparently believes that there is no reason to seek the overthrow of Hamas simply because the US is required by US law and binding UN Security Council resolutions to do so. The US Treasury Department has reportedly just removed all but one Hamas official from its list of known terrorists and so paved the way for Hamas to receive funding from Europe.

As for Israel, during his trip here this week, Obama's Middle East envoy George Mitchell came up with a revolutionary new idea. In the face of Palestinian intransigence, Mitchell introduced the earthshaking concept of pressuring Israel to make concessions to the Palestinians.

When it comes to Iran, the Obama administration behaves as though the jury is still out on whether the mullahs are even seeking nuclear weapons. Secretary of State Hillary Clinton said last Thursday that Iran might face some tough statements from the world if it continues to refuse to be appeased by the Obama White House, although she couldn't say whether any actual steps would be taken to prevent Iran from acquiring nuclear weapons, which she wouldn't acknowledge the mullahs are developing.

And in his State of the Union address on Wednesday, Obama himself made clear that the US will do nothing to prevent Iran from developing nuclear weapons. As far as Obama is concerned, the nuclear arsenal in most urgent need of evisceration is the US's nuclear arsenal.

All of this just goes to show that at the end of the day, now when the chips are down, there is only one "enlightened" nation in the world that may actually do something to prevent the advance of murderous evil. And Israel unfortunately is of two minds on the issue.

On the one hand, we have Netanyahu, who is clearly focused on preventing another Holocaust of Jewry. But on the other hand, we have Defense Minister Ehud Barak, who on Tuesday claimed that the absence of peace with the Palestinians - not Iran - is the greatest threat that Israel faces today. As he put it, "The lack of defined boundaries within Israel, and not an Iranian bomb, is the greatest threat to our future."

Barak's outrageous pronouncement is a succinct encapsulation of the great aspiration of the Israeli Left. If he could only be right, then Israel would be able to singlehandedly solve all the problems of the region and be immediately adored by the likes of the EU and the Obama administration just by making itself smaller.

So with the scourge of moral and strategic blindness rampant not only in Europe and America, but within his own government, Netanyahu rapidly approaches his moment of truth.

In what will undoubtedly be the most fateful decision of his life, he will have to decide whether Iran will become a nuclear power, or whether Israel, standing alone, will prevent it from becoming a nuclear power.

Was his declaration of "Never Again," at Auschwitz just the bloviating of yet another "enlightened" leader who lacks the courage of his convictions? Or was it a solemn vow that Zionism's promise will be kept?