Netanyahu at Auschwitz Says Prophecies of Ezekiel 37 Have Been Fulfilled

This weekend, Lynn and I are in Edmonton, Alberta, Canada, where I will be speaking at Break Forth, the largest evangelical Christian conference held in Canada every year. I will be teaching the prophecies of Ezekiel 36-39, the centrality of Israel in God’s plan and purpose for mankind in the last days, the threat of Radical Islam, and the importance of building a global movement of Christians committed to showing the people of the epicenter unconditional love and unwavering support.

As I prepare to teach a series of four 1-hour seminars on these topics today, I awoke to read news coverage of Israeli Prime Minister Benjamin Netanyahu’s address this week in Poland, commemorating the 65th anniversary of liberation of Auschwitz. 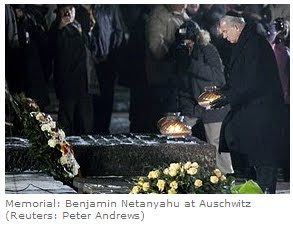 Speaking on the actual site of the Nazi death camp, the Prime Minister delivered a major address warning the world of new genocidal threats against the Jewish people and the importance of acting early enough to prevent such threats from coming to pass. He also declared to the people of Europe and the world that the prophecies of Ezekiel 37 have been fulfilled.

It was an extraordinary moment. Rarely has any world leader given a major address on an international stage declaring End Times prophecies from the Bible have come true. But that is exactly what Netanyahu did.

Inside the Revolution: How the Followers of Jihad, Jefferson & Jesus Are Battling to Dominate the Middle East... - Joel C. Rosenberg (Book)