Two Lawyers from Bavaria recently asked a German government minister to re-classify the Bible as a book considered too dangerous for children because of its violent content. "It preaches genocide, racism, enmity towards Jews, gruesome executions for adulterers and homosexuals, the murder of one's own children and many other perversities," wrote Christian Sailer and Gert-Joachim Hetzel. [1] The duo further charged that God’s Word contained "bloodthirsty and human rights-violating passages" [2] and want it placed on a list of books unsuitable for children until the offending passages are removed, so much for liberal tolerance!

One thing is clear about these two German lawyers; they don't have a clue when it comes to understanding the biblical framework and what the Bible teaches. Based upon their way of thinking, every history book and most newspaper articles would also have to be listed if the same standards were applied. [3] Of course, this kind of charge is absurd and is the product of taking politically correct logic to an extreme degree. Nevertheless, I have seen over the years, many Bible believing Christians fall for the belief that violence, in-and-of-itself, is always wrong. Many Christians fall for the liberal line that all violence is always wrong. If such is the case, then God Himself is unethical.

Recently, we have seen the movie "The Patriot" receive an "R" rating because it portrays a young boy attempting to shoot a British soldier during America's War for Independence. There are virtually no cuss words and not one sexual scene in the movie, but because of the liberal view that all violence is categorically evil, it unjustifiably received an "R" rating.

Have you ever stopped to think that if Hollywood ever made an accurate film about the tribulation and the Second Advent it would be one of the most violent films in the history of film making? So what would be a biblical view of violence and how does it relate to prophecy? 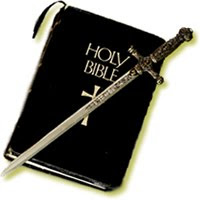 Violence and the Bible

I am not saying that most violence is good. I am saying that from a biblical perspective, in this fallen world, there is such a thing as good and bad violence. I think the Bible teaches that there is just violence that should be exercised against evil and evil violence when carried out against the innocent.

Violence is due to the fall of man into sin through Adam's act of rebellion (Gen.3:1-18). Because of Adam's disobedient act, God cursed Adam, Eve, and the serpent (Satan) (Gen. 3:8-18). God's curse was a judgment upon the guilty parties because of their rebellion. Judgment usually involves violence of some kind. Since God is a righteous God, He cannot allow sin and rebellion to go unpunished. Thus, when the righteousness of God encounters sin, violent judgment is the result. Judgment is necessary because God is righteous. This is righteous violence, from God to man.

Unrighteous violence is exhibited by fallen man toward his fellow man and is the outworking of his fallen, sinful nature. For example, evil violence was the result of Cain’s jealousy toward Abel when he murdered him (Gen. 4:3-15) with a sacrificial knife (implied by the Greek word in 1 John 3:12). This is the kind of evil violence, which we should all be opposed to, since it is the expression of our sin, our rebellion against God and His commandments.

Things did not get better after Cain's murder of his brother Abel, instead, they degenerated into greater violence. Genesis 6:2 tells us that one of the reasons for the global flood in the days of Noah was because "the earth was corrupt in the sight of God, and the earth was filled with violence." Certainly not righteous violence, but "X" rated violence of men because of their sin. God's righteousness was about to be expressed in the global flood because His assessment was that "the earth is filled with violence because of them (mankind)." His response was "to destroy them with the earth" (Gen. 6:13), in righteous judgment, which is expressed by the violent act of the flood.

The flood did not wash away mankind's sin nature nor his personal acts of sin. Because mankind could not govern himself, God instituted the instrument of civil government, accompanied by capital punishment, for the purpose of restraining the evil violence of mankind (Gen. 9:5-7) until Christ returns to earth to personally reign and rule during the millennium. Genesis 6:6 says, “Whoever sheds man's blood, by man (i.e., humanity) his blood shall be shed, for in the image of God He made man." Thus, the violent act of capital punishment is commanded by God to be mediated through civil government as a just act of violence. God implemented capital punishment for murder, even though He knew, in His omniscience, that His only Son, Jesus, would be murdered through the greatest miscarriage of justice in history. Christ's crucifixion was clearly an act of evil violence.

It should be clear, as we understand God's future prophetic plan for the universe and planet earth, that prophecy includes judgment from a righteous God. Mixed throughout this and all of God's judgment is grace toward His elect people throughout the ages. God's judgment throughout history is expressed in the form of righteous or good violence. But, why must there be violence from God?

Over the years I have encountered many people who have expressed their desire for the removal of evil and violence from this world. This concern is often expressed in the form of a question as to why God allows wars, suffering, and violence. Such a question betrays a misunderstanding of evil and violence. Evil, death, and violence entered the world as a result of man's sin (Rom.5:12-21; 1 Cor. 15:20-22). Evil entered the universe through Satan and his fallen angels (Isa. 14:1-23; Ezek. 28:1-19; Rev. .12:4). God's creation of man and angels are responsible for introducing evil into the prefect creation. God's judgment of evil through the violent means of death and other sorrows is the only response that a truly holy, righteous, and just Being could put forth.

Thus, to answer the critic's request - "that God not allow evil in His universe" - requires a violent judgment in order to separate evil from good. The request to remove evil from the universe is a petition for the end of history, when God removes evil through His righteous judgment. This is what heaven and hell is all about; the eternal separation of good and evil. There will not be violence in heaven. But hell will surely be a place of ceaseless violence.

Paul told the Thessalonians that they could relax and not think that they had to seek revenge against those who were the source of the "persecutions and afflictions which you endure" (2 Thess. 1:4). Why? Because, God would take care of the problem when He returns in judgment. Notice what Paul says:

For after all it is only just for God to repay with affliction those who afflict you, and to give relief to you who are afflicted and to us as well when the Lord Jesus shall be revealed from heaven with His mighty angels in flaming fire, dealing out retribution to those who do not know God and to those who do not obey the gospel of our Lord Jesus. And these will pay the penalty of eternal destruction, away from the presence of the Lord and from the glory of His power, when He comes to be glorified in His saints on that day, and to be marveled at among all who have believed - for our testimony to you was believed (2 Thess. 1:6-10).

Such a statement, as that one above, will require violence in order to accomplish. Such violence will be good and righteous, because it will right some of the wrongs of history. The God of the Bible is a righteous and just God.

Surely all of us have read a story or seen a movie or play where an individual, group, or nation is oppressed by a tyrant or bully. At a crucial point in the story, a hero arrives to save the victim and destroy the oppressor. When this moment arrives in the drama, there is always a sense of relief and euphoria because right triumphed over the bad, good over evil, righteousness over unrighteousness. That is what is scheduled to occur in the real drama of human history. Our Lord is going to return to planet earth at the height of global tyranny from Satan, the Antichrist, and the False Prophet and cast them into the bottomless pit and the Lake of Fire (Rev. 19:19-20:3). I hope that you will be standing and cheering with me when this violent moment occurs. Perhaps the unbelieving world will raise the question of violence. Yet it will be a time when God will be implementing in history His righteousness and justice.

I am convinced that one of the reasons that many unbelievers are opposed to all violence is because they sense deep down in their own souls that they are unrighteous and have violated God's righteous standards. They sense that when the time comes for God to separate forever good and evil, that they would be the ones who would be the recipients of God's violent judgment. Thus, like Satan of old, they attempt to construct an artificial standard in thin air by which they will attempt to say to the holy God, "That's not fair!" And if it is not fair then God does not have the right to judge them. Such guilty consciences will not be a legitimate basis upon which to condemn God and excuse themselves. For Scripture says that at the final judgment no one will be able to hide from this event (Rev. 20:11) and every mouth will be shut before Him (Rom. 3:19). Every creature will be made to realize that indeed, the God of the Bible is righteous and just. Thus, all of His acts are likewise righteous and just, including His acts of violence.

What is wonderful to know about our God is that He has provided a way to escape the violent judgment of God. This he accomplished through the violent death of Christ on the cross so that all who believe in Him will receive the gift of eternal life and will not enter into condemnation. This is truly good news in light of reality. This is why we can believe that not all violence is evil, some is good and this fact is being demonstrated in present history and will be finally put on display for the whole world to see and understand through the implementation of God prophetic plan for the future. Maranatha!