Google, however, says it was all a mistake, and denies having done anything to favor Islam. “This is a bug,” insisted a Google spokesman, “and we’re working to fix it as quickly as we can.” Oddly enough, however, even with all of Google’s technical savvy, this “bug” persisted for days and continues as of this writing, long after Google’s announcement that it would quickly be fixed. 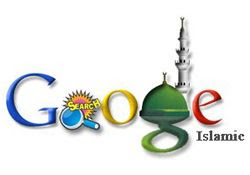 Or perhaps it isn’t so odd, in light of Google’s long-established penchant for favoring the hard Left and its allies in the global jihad. Critics have complained for years about Google’s tendency to decorate its logo colorfully for cherished days of the Left such as Earth Day and International Women’s Day, while ignoring Christmas (aside from bland Holiday greetings) and Easter. What’s more, Google-owned YouTube has more than once removed material critical of Islamic jihad supremacism, while allowing blood-curdling pro-jihad and vile anti-Semitic material to remain on the site. Google’s policies on removing videos all too often has appeared to follow a consistent Leftist line: anti-American, anti-Israel, pro-jihad.

It is also a remarkable coincidence that Google’s “bug” would appear in Google not about Judaism or Christianity or Hinduism or Buddhism, but in connection with the world’s most thin-skinned religion. The one religion shielded from adverse judgment at Google is also the only religion that is currently engaged in an organized campaign to stifle honest discussion about its texts and teachings that inspire violence. In 2008 the Secretary General of the 57-government Organization of the Islamic Conference (OIC), the largest voting bloc at the United Nations today, Ekmeleddin Ihsanoglu, warned the West about “red lines that should not be crossed” regarding free speech about Islam and terrorism. For years now the OIC has spearheaded an effort at the UN to compel member states to criminalize what it calls “defamation of religions,” but by which it clearly means any honest discussion of the texts and teachings of Islam that jihadists invoke to justify violence and supremacism. Interestingly enough, the OIC stepped up this campaign in the wake of the publication of cartoons of Muhammad in a Danish newspaper that touched off worldwide Muslim riots. Google, at the time those riots were raging, was dutifully removing from YouTube videos that depicted the cartoons.

Thus when the OIC has Google, it doesn’t need international edicts muzzling free speech. Like many on the Left, Google seems all too willing to carry water for the Islamic bloc’s war against free speech and to oblige the OIC’s totalitarian and thuggish influences, by voluntarily refraining from doing anything that might offend Muslims. While its restriction of the automated search suggestions may seem insignificant, its overall willingness to conform to notoriously fragile Islamic sensibilities and deep-six criticism of Islam is anything but trivial.

What’s more, what with Google’s influence as by far the premier search engine, the idea that Western non-Muslims must make special allowances for easily-offended Muslims sets a precedent that can only bear bitter fruit in the future. Ultimately Google, and every individual, group, business, and governing authority in the West, is going to have to decide whether it is going to stand for the hard-won principles of free speech and free inquiry, or kowtow to Islamic supremacism and intimidation. When the censorship is voluntary and self-imposed, as in Google’s case, it is all the more shameful.

Google suggests Islam is nothing - The Register