Like many of you, I'm praying for those affected by the earthquake in Haiti. Heartbreaking.

It's been well publicized that Pat Robertson claimed the earthquake is God's judgment on Haiti for past sin, including making a pact with the devil.

Yesterday I was on the radio talking about the subject of evil and suffering, and was asked about Robertson’s comments. If you wish, listen to the audio of the 10-minute exchange concerning this. 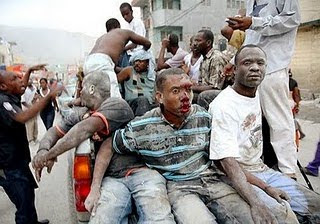 The earthquake is a reminder that all of us live only by God’s mercy. Though God judged both individuals and nations as recorded in Scripture, we know this only because he revealed it, NOT because of the terrible things that happened. Job’s friends wrongly stated Job suffered because God was judging him for sin, while God called Job blameless. Jesus said the man wasn’t blind because of any sin committed by him or his father, but that God might be glorified in him. And check out Luke 13:1-5:

This is no time to declare that Haiti as a nation is being judged. We don’t know that, because God has not revealed it, and it is just speculation. We do know that we ALL deserve God’s judgment, and we all live by his mercy. Does Haiti deserve worse judgment than America does for our slaughter of 50 million unborn children and our exportation of glorified sexual immorality to every corner of the world?

We should humbly and generously be the hands and feet of Jesus to serve and help the poor people of Haiti, in the name of our Savior, no stranger to poverty and suffering. (To Robertson’s credit, by the way, he did say we should reach out and help the people of Haiti.)

If you're looking to give to help with this disaster, check out the front page of the Eternal Perspective Ministries website for links to a few of the many ministries who are actively responding to the crisis. (You can also send your contributions to EPM, and 100% of designated contributions will be passed on to worthy ministries working in Haiti.) You might also want to check out an article about natural disasters excerpted from my book If God Is Good.

If God Is Good: Faith in the Midst of Suffering and Evil - Randy Alcorn (Book)

Biden: Rebuilding Haiti in the wake of deadly earthquake will remain a priority for the US - Los Angeles Times