Letter to Stress Need to Carve up Israel for New State

TEL AVIV – President Obama is planning to issue a letter in the next few weeks guaranteeing U.S. support for a plan to give much of the West Bank and eastern sections of Jerusalem to Palestinians within two years, WND has learned.

The presidential letter is slated to stress U.S. commitments to Israeli security as well.

It would state the final borders of a Palestinian country will be determined by direct Israeli-Palestinian negotiations but that the U.S. supports a Palestinian state in the general 1967 borders – meaning the West Bank, Gaza Strip and eastern Jerusalem.

According to a source in Prime Minister Benjamin Netanyahu's office, the Israeli leader is pushing against a formal letter from Obama, recommending the U.S. president issue an official oral declaration instead.

The contents of the letter are being discussed by Israelis with both Egypt and the U.S. and separately by the Palestinian Authority with Egypt and the US. Egypt is a key broker in the matter.

WND has learned that on Monday Israeli National Security Adviser Uzi Arad was in Egypt on a secret visit to discuss Israeli-Palestinian talks as well as the content of Obama's future declaration.

Arad's visit until now has not been reported by the news media.

But earlier this week, WND reported that Middle East security and diplomatic officials said Israel and the Palestinian Authority are negotiating indirectly via the U.S., Jordan and Egypt to outline a future Palestinian state that would encompass Jerusalem.

Popular perception has it that talks between Israel and the PA are stalled over a Palestinian demand that Prime Minister Benjamin Netanyahu extend a 10-month West Bank settlement freeze to include Jewish communities in eastern Jerusalem.

On Wednesday, Netanyahu's office released a statement declaring the prime minister would "never" cede control of united Jerusalem nor retreat to the 1967 borders, referring to an evacuation of the West Bank and eastern Jerusalem. The statement came after Egypt's foreign minister said in Cairo last week Netanyahu was ready to discuss making "Arab Jerusalem" the capital of a Palestinian state.

According to Middle East security and diplomatic officials, however, Netanyahu's statement may be misleading unless he meant he would not retreat to the exact 1967 lines. Those officials, from Egypt, Jordan, the PA and Israel, told WND in separate interviews over the course of the last few weeks that Israel is in advanced stages of outlining a future Palestinian state that would encompass most of the West Bank. Also, Jerusalem is being discussed between Israel and members of the Obama administration, the officials said.

To point out the advanced levels of the current talks, a PA official told WND that a visit next week by President Obama's national security adviser, Jim Jones, will center around security arrangements for a future Palestinian state in the West Bank.

The arrangements may include a contingent of Jordanian troops in the strategic territory as well as private Palestinian firms and international soldiers participating in patrolling the Palestinian side of a future border, the official said.

Officially, White House spokesman Mike Hammer said that in his consultations, Jones "will discuss the full range of regional challenges and opportunities at this critical time in the Middle East."

According to the Middle East security officials, Netanyahu agreed in principal to establish a Palestinian state along the 1967 borders – the Gaza Strip, West Bank and eastern Jerusalem. However, Israel would retain what are known as major settlement blocks, including Ariel, Gush Etzion and Maale Adumim.

The officials said the formula, established under Netanyahu's predecessor, Ehud Olmert, would call for a 100 percent territorial exchange, meaning that any West Bank Jewish communities retained by Israel would be compensated to the PA using other land, such as territory in the Israeli Negev alongside the Gaza Strip.

Status of Jerusalem up for Talks

With regard to Jerusalem, talks between the U.S. and Israel are in their infancy. 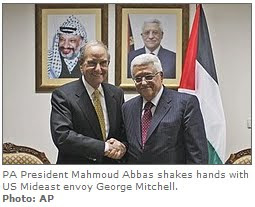 The officials from the Obama administration most publicly identified with brokering Israeli-Palestinian talks include Jones and Obama's envoy to the Israeli-Palestinian conflict, George Mitchell. However, WND has learned Dennis Ross, an Obama foreign policy adviser who served as Mideast envoy to the Clinton administration, is actively engaged in brokering a deal regarding Jerusalem.

Israeli diplomatic sources said Ross wants to use the formula established under the Clinton administration that would see Jewish sections of Jerusalem becoming Israeli while areas largely inhabited by Arabs would become Palestinian. About 100,000 Arabs live illegally on Jewish-owned land in Jerusalem.

The fact that the talks are ongoing through mediators leaves Netanyahu and PA President Mahmoud Abbas open to declaring that there are no direct negotiations.

Israeli leaders in the recent past claimed talks were not occurring or did not include certain territories only later to admit the territory in question had been ceded in secret negotiations.

After months of denials the status of Jerusalem was on the table during negotiations, Olmert's office finally confirmed in August 2008 that Jerusalem had been included in talks. Also, weeks before he departed office, Olmert gave an interview to Israel's leading daily, Yediot Aharonot, admitting that during negotiations he offered Abbas 94 percent of the West Bank and peripheral areas of eastern Jerusalem. Olmert's office repeatedly had denied such talks.

Similarly, Prime Minister Ariel Sharon ran for office in 2000 on the very election platform that he would not withdraw from the Gaza Strip. Sharon was running against Amram Mitzneh, a leader of Israel's leftist Labor party who had pledged to evacuate Gaza. In 2004, Sharon did an about-face and announced his Gaza disengagement policy. One year later, Sharon pulled all Jewish communities out of the Gaza Strip.