What prophetic significance can we assign to the recent chapter of the Global Financial Crisis (GFC)? While we have dealt with this question extensively over the past year and more, it remains fascinating to observe the pattern of its
continuing fallout upon the world. Its effects are far from over.

While the GFC certainly was not the greatest destructive financial event ever known to mankind, its timing and impact are surely unprecedented and significant. Prophecy scholars can be forgiven for being tempted to super-impose current events upon the eschatological time line laid out in the Bible. Of course, we need to be exceedingly careful here about any such conclusions derived in this way, as these in essence are speculative. All the same, the general trend of geopolitical developments over the last 50, 100 years and more cannot be denied. These clearly align or point to endtime developments and global conditions described in the Bible. 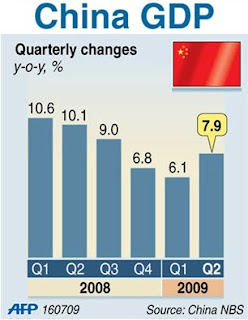 China has emerged as one of the strongest economic forces in the world, especially as this country appears to have weathered the sharpest global slowdown since the 1930s with aplomb. Whether or not China has manipulated an appearance of economic resilience over the past few years, its rapid ascension is increasingly driving a wedge between Japan and the U.S. Why? Japan has run out of room. Its government debt levels now are amongst the highest in the world even as it has an aging population. It needs to align itself with China, a nation that has the potential of a large, untapped work force (as its poor country-side population moves into city centers and enter the production work force) and possesses a large trade influence. Japan’s share of trade with China in 2008 was 17.4% (as compared to only 10.4% in 2004). Without a doubt, rising exports with China has helped Japan’s economy survive its recent plunge in trade with the U.S. The same trend is evident with another major Asian trading nation, South Korea. In 2002, the U.S. in comparison took 20% of South Korea’s exports. In the first 10 months of 2009, America’s share dropped to 10.5%, while China accounted for nearly 24%.

In Japan, the new Prime Minister, Yukio Hatoyama, is contemplating to forge a trade group with China and South Korea. Says, economist Masaru Kaneko of Keio University, “There’s a consensus among policymakers that Japan can’t rely on relations with the U.S., because Washington’s global influence has diminished.

Asia is forming its own influential axis and will eventually leave America dangling, especially, as the U.S. falls into greater indebtedness and long-term economic stagnation. However, the rise of Asia can also be seen to be a factor pulling Europe into its future.

Europe today faces enormous pressures as a result of global trends, economic challenges and transitional monetary pressures. Here are a few quotes from a recent article by Carlo Bastasin of the influential Peterson Institute.

“In a world where the exchange rate of the dollar and the renminbi (China’s currency, also called the yuan) are “governed” for domestic purposes, Europe risks being caught as a scapegoat for other countries’ imbalances. The lack of a proper currency policy is the most intuitive argument in favor of establishing a political governing authority in the euro zone. […] new and more subtle reasons are emerging for establishing a political head on top of the euro zone economic shoulders. There are two reasons for this. One is that the ECB (European Central Bank) must be free to pursue its only statutory objective, low inflation, which means that it should avoid increasing the monetary base through the purchase of government bonds under political pressure. The second reason is that (some) euro zone member states do not want to share a common fiscal responsibility. Nor do they want to issue common bonds. As a consequence, euro-denominated bonds lack the guarantee of a central bank that in a crisis situation could be able to print money and buy euros even if only for stabilization purposes.”

What does that rather technical opinion really mean? Europe must continue to move closer politically if it is to successfully maneuver between the stresses of a stagnating U.S., an economically rising Asia and an independent China that continues to grossly manipulate its currency. (Analysts suggest that China’s yuan is some 50% undervalued against the U.S. dollar.) All in all, we can see that the Global Financial Crisis (GFC) continues to exert its monumental influences upon the world.

There are no shortage of trends visible today that align with the Biblical view of a world moving towards multipolarism (see this issue’s Feature Article for a more in-depth treatment of this topic) as well the possible impetus that will urge 10 kings (rulers) out of the world’s Romansphere to make an unprecedented alliance. Just what endtime events cause 10 kings to come together and form a “global power coalition? (See our 3-part series, Last-day Global Power Coalition: Searching for the Last-day 10 Kings for an in-depth analysis of this topic).

The answer? We cannot yet exactly know for sure. While we may want to indulge our speculations, the fact remains that even global secular trends can suddenly veer into reverse for a time. If this occurs, it should not be a surprise, as this pattern … two steps forward, one step back … is a frequently observed pattern within longer-term trends. Yet, at the same time it should not go unnoticed that recent world events, accelerated by way of the GFC, are not contrary to the Bible’s prophetic timeline. While there can be setbacks, sudden acceleration is also possible.

UN says global economy will bounce back in 2010 - AP