Hypocrisy Watch: Congressional Hearings on White House Gate Crashers, but Not on Climategate

The nation's Capital is in a brouhaha over a husband and wife team crashing a state dinner at the White House. The House of Representatives Homeland Security Committee is already holding hearings on how this could have happened. The White House is refusing to allow its Social Secretary Desiree Rogers to testify. The couple who crashed the party are also refusing to testify. The news media is covering the event as if it were the new Watergate scandal. And the White House appears to have pulled out all the stops to make sure the news media has every bit of information on the couple to permanently ruin their reputation. 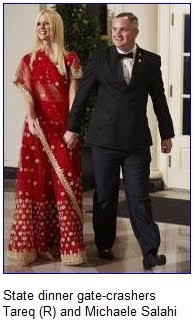 The reporters and the Congressional Democrats seem outraged that someone actually could crash a White House party. There is little mention that this couple went through all the security checks that everyone else did on the evening of the party - that they didn't remotely pose a threat to the man who occupies the Oval Office. The White House is reluctantly sending a signal that perhaps its own people were at fault for the security breech. And Congressional Republicans are using the incident to point out the incompetency of the White House staff, trying to make sure that the reputation of the Secret Service is not tarnished by political hacks covering up their mistakes.

Much ado about nothing. And if ever there were an indication of how these little Neros are fiddling while Rome burns, this is it. Within 48 hours of a couple crashing a state dinner at the White House after complying with all the security checkpoints, there is a Congressional hearing set on what went wrong. Yet, the Democratic leadership, in collusion with the White House, refuses to set Congressional hearings on the fraud committed by global warming scientists who have used and are using taxpayer money to defraud the entire world into thinking that global warming is going to kill the planet. Congress, the White House and the mainstream media have ignored the mounting evidence of the global warming fraud.

Instead, Senator Barbara Boxer, the ranking Democrat on the Senate Environment and Public Works Committee, is saying that a criminal investigation should be conducted on the people who hacked into the Global Warming research computers and exposed the fraud. She said her committee may hold hearings or may not, but if it does, it will focus on the criminality of how the fraud was leaked to the public - not whether scientists intentionally defrauded taxpayers by publishing false information.

"But evil men and seducers shall wax worse and worse, deceiving, and being deceived."

The government collusion to defraud American citizens is what should be investigated.

Scandals in Scandinavia: Time to Cancel IPCC and Withdraw Nobel Prizes From Them and Gore - Canada Free Press