In chapter seven of my 2006 non-fiction book, Epicenter, I encourage readers to watch for this future headline: “A CZAR RISES IN RUSSIA, RAISING FEARS OF A NEW COLD WAR,” and specifically suggest readers watch for Vladimir Putin to attempt to stay in power far beyond 2008.

“Putin has repeatedly promised he will not attempt to extend his stay in office beyond 2008…. But how seriously should Putin’s many pledges be taken? …Now in his fifties, Putin is still a young man, at the top of his game, with no professional experience of any kind other than being a KGB-trained suppressor of dissidents and a rising political leader…. [Russians] are looking for a strong hand to rule, and Putin is providing just that.” 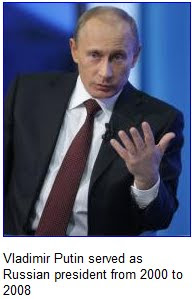 Excerpts: In separate coverage, we learn that Putin praised parts of Joseph Stalin’s legacy from the 20th century.

“The more one learns about the Russia leader, the more one can understand why nearly everywhere I speak these days, people ask me, ‘Is Vladimir Putin Gog? Is he the Russian leader Ezekiel predicted would attack Israel [in the last days, according to Ezekiel 38-39]? It is an interesting question, given recent trends. Putin is certainly perceived as a rising czar. He speaks fondly of Russia’s historic monarchy. He is centralizing political power and control to himself. He is rebuilding Russia’s military for offensive purposes. He speaks of the collapse of the Soviet Empire as a catastrophe and talks of restoring the historical glory of Mother Russia. He is operating in a social and political climate that increasingly desires a leader along the lines of Joseph Stalin. What’s more, he’s steadily building political, economic and military ties with the very countries Ezekiel described in his vision of the future…. All that said, however, one can neither definitively conclude that Putin is the one of whom Ezekiel spoke nor conclusively rule him out. Not yet, at least. More needs to happen in Russia and the Middle East before we can know for sure, one way or the other. Putin may, after all, simply be setting the stage for someone else to rise.”