Concern is growing in Israel that the Netanyahu government may be poised to release a convicted murderer and exceptionally charismatic terrorist leader in exchange for the return of IDF prisoner of war Gilad Schalit.

Marwan Barghouti, a Fatah and Tanzim chieftain, is widely considered the natural successor to the late Yasser Arafat, the mass murderer of countless Jews and other nationals during his 45-year tenure as chairman of the Palestine Liberation Organization (PLO).

Schalit has been held captive by Hamas - apparently in the Gaza Strip - for more than three years.

While the government in Jerusalem is fighting to keep details of its negotiations for its soldier's release under wraps, other sources are reporting that Barghouti may head the list of as many as 1000 "Palestinian" prisoners Israel will let go in exchange for Schalit. 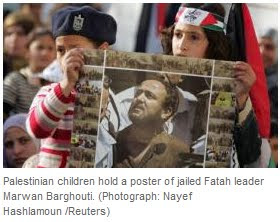 Analysts believe Barghouti may be able to unite Fatah and the Hamas to become the new leader of a single "Palestinian" entity Israel will be forced by world pressure to negotiate with.

Currently serving five consecutive life sentences for killing Israelis, Barghouti will reportedly be offered his freedom provided he agrees to go into exile.

But concerned watchers have noted that Israel made one of its most fatal mistakes when it let Arafat go free after having him in the IDF's gunsights in Beirut in 1982.

From exile the arch-terrorist was able to consolidate his forces, direct his international terror campaign to maintain pressure on the world to support his cause, and wait for the political climate to ripen for him to be welcomed to Israel by an Israeli government pressured by the United States.

"By freeing Marwan Barghouti with all the other Hamas and Fatah prisoners, Israel will cause the only man charismatic enough to be able to do so to unite the Palestinian people – Fatah and Hamas into one.

"Hamas will become the controlling factor in all upcoming negotiations with Israel, and will possibly also be the winner in future elections among the Arabs in Judea and Samaria," van der Hoeven warned.

Instead of furthering Israel's security and well being, this move "may lead to a Hamas-led independent state under the leadership of Barghouti, which will without question be used to further dismantle the State of Israel."

That misguided decision "caused him to become the respected Palestinian leader with whom they then had to deal in Oslo and other places. Thus did they put Israel on the mortally dangerous road towards an independent Palestinian state!

"Now, with Israel for a second time about to make this same mistake, that state may well become a reality under the leadership of a Barghouti; another terrorist chief set free by the self-destructive Israelis."

The veteran Christian Zionist recalled how a prophet had once addressed a weak leader of Israel:

“Thus says the LORD, because you have let slip out of your hand a man who I had appointed to utter destruction, therefore your life shall go for his life AND YOUR PEOPLE FOR HIS PEOPLE.” (1 Kings 20:42 emphasis added.)

Peres says will have to pardon many prisoners - YNET News