A Temporary Settlement Freeze, but Not in Jerusalem

Peace between Israel and the Palestinians appears as elusive as ever. The Israeli government has agreed to a settlement freeze in order to coax the Palestinians back to the negotiating table, but the Palestinians say it isn't enough. At the same time, to Israel's consternation, the EU has drafted a statement calling for a Palestinian state with East Jerusalem as its capital.

Peace talks between the Israelis and Palestinians broke down nearly a year ago and have been slow to start up again. The Palestinians have refused to negotiate with Israel unless Israeli settlers stop all building in settlements in the West Bank and East Jerusalem, something Israel has been reluctant to agree to. Israel Prime Minister Benjamin Netanyahu finally ordered a freeze on construction in West Bank settlements, but not in East Jerusalem.

Netanyahu made it clear that the building freeze was only going to last for a temporary 10-month period until peace talks worked out more permanent decisions. Any final, lasting agreement on the West Bank land "will be determined at the end of negotiations and not a day earlier," he said at a conference sponsored by the Calcalist financial newspaper. 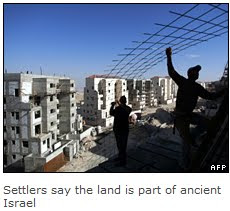 Inspectors were immediately sent out to the settlements to enforce the order and met with opposition from the settlers who live there. In at least four settlements, inspectors were blocked from entering. According to Netanyahu, the freeze "was not an easy decision, not for the settlers and not for me." (It apparently was such a difficult decision for some settlers that they've refused to agree to it.)

The Palestinians, on the other hand, have said the freeze hasn't gone far enough. It doesn't affect public buildings, like new schools, and it also does not apply to construction in East Jerusalem.

Jerusalem is a very emotional issue for both sides. Israel captured East Jerusalem during the 1967 war, reuniting the city, and Netanyahu has on many occasions stated that he will never budge on keeping Jerusalem whole.

The current president of the European Union, from Sweden, has recently proposed a statement recognizing East Jerusalem as the capital of a future Palestinian state. The text, quoted by Haaretz, refers to a "two-state solution with an independent, democratic, contiguous and viable state of Palestine, comprising the West Bank and Gaza and with east Jerusalem as its capital, living side by side in peace and security with the state of Israel."

The drafted statement, which hasn't been voted on and is not official, drew immediate fire from Israel. Israel's foreign ministry criticized the EU president, declaring that the EU would lose its credibility with Israel by siding wholly with the Palestinians on such a major issue. "The move led by Sweden damages the ability of the European Union to take a role and be a significant factor in negotiations between Israel and the Palestinians," the statement said.

The unity of Jerusalem will continue to be a major issue in the Israeli-Palestinian conflict, and is one on which neither side plans to move an inch.

EU wants to strengthen PA in E. Jerusalem - Times of the Internet