Concern over America 's national debt has seen a sharp rise. According to a recent Rasmussen Report, 42 percent of Americans now say that cutting the deficit should be the president's first important priority. I've had dozens of news articles forwarded to me in the past week that focus on this subject.

Some folks are predicting total chaos will come to the financial markets.

"We have predicted for at least the past two years that the primary collapse of the U.S. economy would occur in 2010. We stand by that prediction." - Neithercorp Press.

I don't know if 2010 is a magic year, but things look very dire for America 's future. A report by the White House's Office of Management and Budget (OMB) seems to extinguish any hope of us being able to climb out of this debt trap. 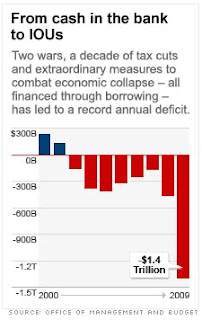 The OMB is usually the branch of government responsible for issuing the most optimistic forecasts of our national budget. In the past, these forecasts would say that we are on track to balance the budget in three years. When we reach that point, our federal deficit is still in the hundreds of billions.

A little over a week ago, the OMB came out with a report that said even if things improve dramatically, we are still headed for bankruptcy. In nine years, the tab for servicing the interest on our debt will exceed $700 billion a year. We currently pay $200 billion in interest. The national debt, which is now $12 trillion, will at that time nearly double in size.

Our fiscal problems are not a decade away. The Treasury has to refinance the short-term debt issued during the financial crisis. This means that about $500 billion is coming due in the next few months. We are also facing another year of deficit spending, so the Fed will need to find buyers for at least another $1.2 trillion in notes. Morgan Stanley's analysts have crunched the numbers and concluded that in the year ending June 2010, there could be a shortfall in demand on the order of $598 billion - about a third of projected new issuance.

The Federal Reserve can step in and purchase the $600 billion in unsold treasury notes. It already owns $4.8 trillion in IOUs, so what's a few hundred more? Well, investors are starting to realize that the system is one giant shell game.

There has to be a point where it becomes mathematically impossible to avoid calamity. I think we are at that point. It's like a plane flying into an obstruction. I'm reminded of the infamous crash in the Canary Islands that remains the deadliest accident in aviation history.

The captain of a Dutch KLM jumbo 747 slammed into another 747 jet that was still taxiing on the runway. Fog had prevented the captain from seeing the other jet, and for some unknown reason he took off without clearance. When the KLM captain realized his mistake, he pulled as hard as he could to get the aircraft into the air. Investigators found this out when they discovered that he had pulled so hard on the throttle, he had ruptured the capillaries in his wrists.

What make me so pessimistic about our debt situation is that there is no effort to pull up on the financial throttle. If anything, the lever is being pushed downward. President Barack Obama is oblivious to our national debt crisis. Just last week, he escalated the war in Afghanistan, a decision that could cost another $1 trillion over the next ten years. He is also considering cutting taxes to stimulate jobs.

We're seeing some signs that the dam is about to burst. Several key nations that have been buyers of Treasury bills and T-bonds in the past have said they are going to be selling U.S. notes. The dollar's value has been rapidly dropping on exchange markets. Gold and silver has been on a record run based mostly on fears of an American debt debacle.

Only God knows how long it will be before our nation slips into financial chaos. I know that when Jesus removes the Church, America will instantly implode. Terry and I have both said it seems most likely that the economy will limp along until the rapture.

With this world system doubly doomed (moral decay and dire financial circumstances), we Christians need to be more mindful of things that are not influenced by the rise and fall of the dollar. In the end, all we have is our relationship with Jesus Christ.