Circus Hypocrisy and the Beast of the Apocalypse

The clamor about socialized healthcare and climate control are like a two ring circus on the world stage, but the consequences of both are akin to a beast gone wild amidst a full house. Throughout the summer, there were hundreds of thousands of people who attended town hall meetings of elected representatives in opposition to the Federal government's plan of socialized medicine. In recent weeks, there has been tremendous evidence that scientists cooked the books on global warming - evidence that the entire theory was built on lies and deception. Both have been ignored by the mainstream media and the White House. 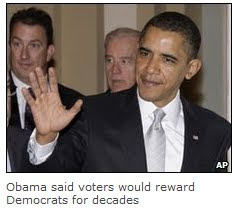 Now the man who occupies the Oval Office is taking to Capital Hill to convince lawmakers of his plan to force socialized healthcare upon the nation despite overwhelming public opposition. He has not only the Democratic Party behind him, but also trusted sources such as the American Association for Retired People, who have joined him in the lie that Americans will be better off under socialized medicine. He has directly lied to the American people by saying that no federal funds will be used for abortion, and that benefits for senior citizens will not be cut. Truth is, any money that goes to Planned Parenthood from the government supports abortion; Medicare programs are cut by some $400 billion.

This week in Copenhagen, another lie is perpetrated. The lie that tremendous wealth redistribution must take place in order to save the planet from the destruction of global warming. Leaked emails and scientific papers indicate that the scientists in charge of global warming science have perpetrated a global lying campaign on the people of the world by falsifying their research; by bullying anyone who questions their undocumented "facts"; and by covering up their lie by destroying all the original temperature data. Yet the White House is striding headlong into setting up an agreement where the United States will be subjected to giving up its sovereignty to a global warming governing body.

This "circus hypocrisy" would be quite amusing if it were acted out on the stages of Las Vegas. But the harsh reality is that these leaders are redefining religion, rewriting the Constitution and conducting a vast communist takeover of the United States of America. Many are calling on Christians, who are to discern and to know the truth, to stand in these perilous times and provide leadership and light to this nation.

When the Sadducees forbid the early Christians from preaching Jesus, Peter replied in Acts 5:29, "We ought to obey God rather than men." It will come down to the question, Who is your God, government or Yahweh? The beast of the apocalypse or the Lamb of God?

ObamaCare: Is the GOP helping pass it? - Hotair.com