The man who occupies the Oval Office (OOO) may be an instrument of end times prophecy as he waffles on his Middle East foreign policy, fueling the hot tempers of the terrorist organization said to represent the Islamists in the peace process - the Palestinian Authority. On May 28th, he met with PA President Mahmoud Abbas, telling him that Israel must stop building all settlements as a precondition for peace talks to move forward. OOO said he told Israeli Prime Minister Benjamin Netanyahu,

"I was very clear about the need to stop settlements, to make sure that we are stopping the building of outposts."

But all that changed over the weekend and now the Palestinians are threatening war. 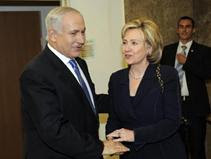 Often the subtle words in diplomacy are the most hard hitting, and Clinton, responding positively to an offer by Netanyahu of a nine month moratorium on new settlement construction, declared to the world that there never was a precondition of settlement construction - a Palestinian demand for resumption of peace talks. The confirmation by Clinton of OOO's September 22 remarks that called for "restraint" rather than a freeze on settlements, angered the Palestinian leadership.

The Jerusalem Post reports Palestinian Authority President Mahmoud Abbas said if Israel continues with its current policies concerning Jerusalem, it will lead to a "religious war." In a speech he delivered on a visit to Morocco, the PA president said that "the fanning of flames by Israeli extremists has caused the dangerous situation which currently prevails in Jerusalem." The Jerusalem Post reported that Abbas said that settlement construction and denying the Palestinians rights posed a threat to Middle East stability. Reports from the Middle East are indicating that Abbas feels so strongly about the settlements issue that he is threatening to resign if he doesn't get his way.

Meantime, the Chinese News Agency Xinhua reports that United Nations Secretary General Ban Ki-moon said Jerusalem must be the capital of two States - Israel and Palestine - living side-by-side in peace and security, with arrangements for the holy sites acceptable to all, if peace in the Middle East is to be achieved. He also said that the Israeli settlements posed a threat to peace, siding with the Palestinian position.

"And in that day will I make Jerusalem a burdensome stone for all people: all that burden themselves with it shall be cut in pieces, though all the people of earth be gathered together against it."

This prophecy is moving toward fulfillment.