It was another bad week in the Middle East. There was mass murder on a scale not seen in years.

On October 25, twin car bombs targeted two Iraqi government buildings, killing at least 160 people and wounding more than 500 in central Baghdad. It was the deadliest attack in Iraq since 2005.

A few days later, a car bomb struck a busy market in northwestern Pakistan, killing 118 people — many women and children. The Wednesday attack left more than 200 people wounded, with over 25 in critical condition.

I think we all know by now that the term "suicide bombing" has a direct connection to the Islamic faith. If a car bomb exploded tomorrow in Berlin, Germany, it would be a safe bet to blame followers of Muhammad for the attack. I had to go back to April 1995 and the truck bombing of the Alfred P. Murrah Federal Building in downtown Oklahoma City to find the last time a non-Muslim carried out a major terrorist attack. If there were no Islamic faith, there would be no need for the Department of Homeland Security.

One of the reasons I have become interested in prophecy is that I believe much of life makes absolutely no sense unless you can apply a biblical guide to it. A strictly secular mind would have a very difficult time trying to make logical sense out of many world events. 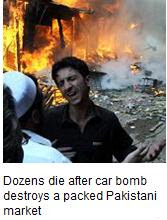 Anyone with an IQ above 50 would have to wonder why Islam has not suffered any major scorn for these depraved bombings. The truth is that Islam has actually grown in popularity.

The killing of women and children in these attacks would seem to be a violation of the most fundamental rule of nature. Even in the most brutal wars of history, there have been guidelines that both sides followed. These terrorists are killing their own countrymen. It makes no difference to them that they slaughter people who worship the same god as they do.

I find it very frustrating to see Islam playing the role of "Teflon religion." The evil deeds of its followers never come back to taint the mother faith. It's like Adolf Hitler walking away scot free from any blame after the defeat of Nazi Germany.

The only logical answer would have to point out the level of control Satan has over this world. Because a unified global religion is part of Satan's master plan, we are not going to see Muslims portrayed as a pariah religion – a title it deserves to have.

This is why the bombings of last week will quickly fade from memory. They will only be remembered as reference points when another massive terrorist attack takes place.

Whenever I write an article, I always do various searches to see what other people have written on the topics related to my article. I did a search on “Judgment of Islam” and mostly came up empty-handed. Sadly, very few Christians are bothered to address the subject.

Let there be no mistake: Judgment will eventually come to the Islamic world. I don’t know why people who understand Bible prophecy are so timid about what is obviously soon to come. Someday, it will side with Israel's enemies and suffer a series of defeats. God’s wrath will leave most Islamic nations as vacant wastelands.

"And the kings of the earth, and the great men, and the rich men, and the chief captains, and the mighty men, and every bondman, and every free man, hid themselves in the dens and in the rocks of the mountains; And said to the mountains and rocks, Fall on us, and hide us from the face of him that sitteth on the throne, and from the wrath of the Lamb: For the great day of his wrath is come; and who shall be able to stand?" (Revelation 6:15-17).

Alarming rise of home grown jihadis in the US - Zee News