I always write specifically about Israel at “Israel Watch.” This week I’d like to depart from that, to some degree, by alerting you to one of the most important books I’ve read in years.

Muslim Mafia, written by Dave Gaubatz and Paul Sperry, is, in a word, chilling. Published by WND Books, Muslim Mafia details the plans that front-groups like CAIR (Council on American Islamic Relations) have for America. Of course, discerning readers will understand that all this impacts Israel, because the Muslim Mafia in America funds terror groups like Hamas and Hezbollah.

Gaubatz, who ran a counter-terrorism task force in Washington D.C., teams with investigative writer Sperry to blow the lid off the nefarious schemes of CAIR and co-horts.

You simply must get this book, read and absorb the information, then share with friends and family. I do not subscribe to the theory that we stick our heads in the sand in the face of troubling issues. I’d much rather be informed and prepared than comfortably sedated. 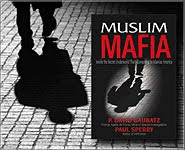 Gaubatz and Sperry’s book reads like a novel, but that’s only for effect. In fact, the whole story is shockingly true, as Gaubatz’ own son, Chris, infiltrated the secretive CAIR. Securing an internship, the younger Gaubatz gathered thousands of sensitive documents during a six-month investigation, and exposed the following incriminating truths (following list courtesy of WorldNetDaily):

If this doesn’t scare you senseless, consider that even the alternative media in America will not touch this story. I could write an entire column about that, but will save for another time. For now, just know that you can literally help your country by getting this book and sharing with others. Grassroots will carry the day with Muslim Mafia — a clarion call for all freedom-loving Americans.

The diabolical schemes exposed in this landmark book have been faced by Israel for a hundred years. It is relatively new to America. Our nation’s enemies have been planning our destruction for a very long time.