The Demon of Diversity

"Everybody's looking for a 'why' answer, and I'll be honest with you, I don't think there's a 'why' answer. And that's probably part of the frustrating thing about being human," stated Army Chaplain Col. Frank Jackson at an "interfaith" service on Fort Hood.

With all due respect to Col. Jackson, he unwittingly illustrated precisely what the "why" is.

The Problem: A vital institution responsible for the safety and protection of the citizens of the nation incapable of making a moral judgment based on an absolute standard that left those within its ranks and within its protectorate vulnerable to predators. Who is this? 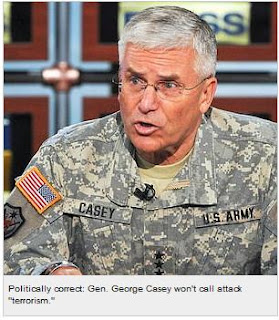 Army chief of staff Gen. George Casey Jr. appeared to express that the demon of diversity was of equal concern to military brass as the first order of national security in stating,

"As great a tragedy as this was – it would be a shame if our diversity became a casualty as well."

When did diversity take precedence over "protect and defend"?

I would certainly concur that prudence and restraint are appropriate, vengeance is not in order, and not all Muslims are represented in the heinous act of Army major-turned-terrorist Nidal Malik Hasan. The fact remains, however, that there is such significant evidence proving his previous links to a radical mosque, his open and consistent hostility toward this country and the theaters of action in Iraq and Iran, and erratic behavior that it can only be described as dereliction of duty by those in command above him for allowing him to remain in military service.

In addition, the "religion of peace" is inseparable from this incident regardless of how frantic our president and the pointy-headed bureaucrats in media, governmental and military circles are to deflect the truth.

We are again "material witnesses" to the chaos brought by religious pluralism and radical multiculturalism that functionally creates a standard of antagonism and hostility toward the "untouchable" caste religions of Judaism and Christianity. Even religious leaders and many, if not most, pastors are fearful of being branded as intolerant by preaching or speaking clear biblical standards of absolute truth.

The unwillingness of Army brass to remove the potential terrorist in a critical position of authority and influence over our sons and daughters is little different from the unwillingness of most pastors to stand against the "wolves" preying on the minds, souls and bodies of the men, women and children God has entrusted to us.

One of the reasons God admonishes us to be cautious about aspiring to be a teacher or leader is the solemn responsibility that leadership carries, because of the authority it wields and the dependence that proper submission to legitimate authority fosters. When leaders fail to believe and act on right principles, the people they are charged with protecting are as vulnerable as … well, as sheep.

"They were scattered for lack of a shepherd, and they became food for every beast of the field and were scattered" (Ezekiel 34:7).

"The things that will destroy America are prosperity-at-any-price, safety-first instead of duty-first, the love of soft living and the get-rich-quick theory of life."

We are guilty on all four counts in this generation, and the lack of courageous pulpits challenging such destructive life choices is a root cause of the disease.

Ideas have consequences, worldviews matter, and our decisions or non-decisions regarding governing authorities will bear fruit, either good or bad. We have this nonsense in our military system because we have it in our political system, educational system, the formerly major media and, most tragically, in the church, the very institution most charged with the protection of Truth.

When I wrote last week about the catastrophic consequences coming if Obama succeeds in creating affirmative action for sexual diversity in our military, I did not in my worst nightmare think that a horrendous illustration of this asinine thinking would explode within days.

We had better decide what we as God-fearing, freedom-loving Americans – particularly those who claim to be followers of Jesus Christ – are willing to die for so we can stand effectively against those willing to kill for their beliefs.

We should also fire every politician and military leader who won't do the same.

What does the Bible say about a Christian serving in the military? - GotQuestions.org