The United Nations Human Rights Council has formally endorsed the conclusions of the UN-commissioned "Goldstone Report" that accuses the government of Israel of war crimes during the Operation Cast Lead assault on Gaza Strip terrorists.

The 574-page report included accusations that Israeli forces indiscriminately attacked universities, mosques and civilian areas. Its pages are full of testimony from witnesses, or partial witnesses or, more accurately, non-witnesses who heard stories from their brother-in-law who knows someone who was almost there.

As South African jurist Richard Goldstone himself described it,

"We had to do the best we could with the material we had."

But if the Goldstone Report represents all the evidence they had, they didn't have much. One example of a non-finding contained in the report concerning the Israeli attack on Gaza's Islamic University read this way:

"These were civilian, educational buildings and the mission did not find any information about their use as a military facility."

They didn't look very hard. The evidence they were looking for was in the Palestinian Broadcasting Authority archives.

The Islamic University was previously featured as the site of clashes between Fatah and Hamas gunmen, with Fatah soldiers identifying it as a weapons laboratory for the new and improved Qassam rockets that Hamas fires by the thousands into Israel. Palestinian Authority television had a full display of the weapons cache found in the Islamic University at the time.

The report also condemns the destruction of several mosques in Gaza by Israeli fire, finding no basis for the Israeli allegations that mosques were used as launching points for Hamas attacks and as weapons storage facilities.

Goldstone complained that the Israelis did not cooperate with the mission, but, like the Palestinian television archives, the IDF testimony is publicly available for anyone, including the UN's "fact finders," to see.

One of the most damning condemnations against Israel centered around the disproportionate number of Palestinian vs. Israeli casualties. The Palestinians claim that some 1,414 Palestinians were killed during the operation, whereas Israel lost only three Israeli civilians and ten Israeli soldiers.

The UN's Principle of Proportionality is very important to the clueless diplomats on the East River. The major goal of any war is to inflict more casualties on the other side than the other side inflicts on yours.

That's how wars get won - one side runs out of fighters.

Israel defended itself with well-photographed accounts of Hamas forces concentrating themselves in civilian populated areas. But the Goldstone mission couldn't confirm it because they couldn't get any of the locals to talk to them.

"The mission notes that those interviewed in Gaza appeared reluctant to speak about the presence of or conduct of hostilities by the Palestinian armed groups."

But if they couldn't get locals to talk, and if they didn't want to look at Israeli evidence, they could have paid attention to Hamas spokesman Fathi Hammad, who when interviewed described his organization as being at one with the people of Gaza:

"This is why they have formed humans shields of the women, the children, the elderly and the mujahideen, in order to challenge the Zionist bombing machine."

But the Report concluded that Israel was to blame for the civilian deaths and that constituted a war crime.

Adding insult to injury, the Goldstone Report totally ignored the most relevant part of the entire Israeli operation: the reason it was launched in the first place. 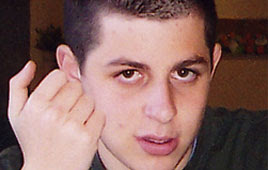 Gilad Shalit was a nineteen-year old Israeli corporal kidnapped by Hamas forces in June, 2006. Hamas didn't kidnap Shalit inside Gaza during an Israeli military incursion. Hamas crossed the border into Israel where they ambushed an Israeli army border post.

During the attack, they killed two Israeli soldiers and kidnapped Shalit, who was incapacitated by a broken left hand and a shoulder wound sustained when his tank was hit by a Palestinian rocket-propelled grenade. Hamas is using Gilad as a hostage to pressure Israel into releasing legally-convicted Palestinians serving time in Israeli prison.

In September, Israel traded 20 Palestinian prisoners in exchange for a videotape that proved that Shalit had not yet been murdered by his captors.

In 1983, the United Nations passed an International Convention against the taking of hostages, titled General Assembly Resolution 146.

Any person who seizes or detains and threatens to kill, to injure or to continue to detain another person (hereinafter referred to as the "hostage") in order to compel a third party, namely, a State, an international intergovernmental organization, a natural or juridical person, or a group of persons, to do or abstain from doing any act as an explicit or implicit condition for the release of the hostage commits the offence of taking of hostages ("hostage-taking") within the meaning of this Convention.

To date, the UN has openly acknowledged that Gilad Shalit is a hostage, seized from foreign soil by agents of Hamas, for the express purpose of compelling a State (Israel) to bargain for Shalit's release. The UN acknowledges it as fact, but to date, has not issued a single word of condemnation against either Hamas or the Palestinians.

In the years between Israel's unilateral withdrawal from the Gaza Strip and the beginning of Operation Cast Lead, agents of Hamas within Gaza fired more than six thousand 'blind' rockets into Israeli cities and towns.

The rockets are fired 'blind' - those firing them have no idea precisely where they will land, whether on a kindergarten or in a civilian market crowded with housewives and their children. There is no discernible effort on the part of Hamas to target Israeli military facilities - the only possible targets are civilian homes and markets.

That was the provocation for Israel's Operation Cast Lead, but the Goldstone Report assigned it little relevance. The UN Human Rights Council wasn't interested in Palestinian atrocities - the target of the investigation was Israel.

After all, the Council's "investigation" into Israel’s response to the shelling of its southern communities by Hamas was preceded by an announcement of the opening of the investigation that found that Israel was responsible for “massive violations of the human rights of the Palestinian people."

("You're guilty, but first we'll give you a fair trial. And then we'll hang ya.")

The Goldstone Report is the UN Human Rights Commission's version of a fair trial.

Despite the HRC's anti-Israel bias was unashamedly carried over into the new Council, President Obama decided to rescind the US boycott and joined the Council in March, 2009.

The Goldstone Report doesn't just accuse Israel of war crimes, it also says that if Israel doesn’t conduct an investigation satisfactory to the Council, the UN reserves the right to prosecute Israel before the International Criminal Court in Geneva.

Since the Council had already reached its conclusion that Israel is guilty of war crimes, and has endorsed the Goldstone Report as having confirmed that assessment, it is clear that the only Israeli internal investigation the Council will accept would be one that reaches the same conclusions Goldstone did.

The international communities hatred for Israel is as white-hot as it is baffling. Israel has never started a war with her neighbors. There is no historical record of Israel ever attempting to provoke conflict with any nation - Israel's responses are historically reactive.

It is as if Mexico sent agents into the US to blow up supermarkets and kill civilians unless America surrenders Texas, New Mexico, Arizona and California - and the UN condemned America. (Come to think of it, that isn't such a far-fetched premise, after all.)

There is NO reason that anyone can logically point to that explains the world's obsession with Israel. Israel came into being the way that the rest of the world's nations did. She was granted territory by Britain by virtue of the Allied conquest of the Ottoman Empire in WWI.

The same Allied authority that created Israel also created the modern states of Iraq, Jordan, Syria, Lebanon, Saudi Arabia, Iran and drew the borders of the modern Middle East. If Israel's existence is questionable, then it is no more questionable than any other existing Middle Eastern state.

But nobody is questioning the legitimacy of Syria or Lebanon. Only Israel, whose land grant dates to 1917 and therefore actually predates the existence of any other modern Middle Eastern state to be carved out of the Ottoman Empire by the Allies.

It makes no sense in the natural. But it makes all kinds of sense from the spiritual perspective. Apart from proving the Divine inspiration of Scripture by its very existence, Israel is an offense to the world body for its status as the Chosen People of God.

Even though the UN is officially atheist, it cannot stand the idea that Israel is the Chosen People of God, even if they were chosen by Israel's God. The world rejects Israel's God in favor of the concept that God is whatever the rest of the world wants Him to be.

The existence of Israel is a constant reminder to the god of this world that his time is limited. The God of Israel cannot be reinvented to conform to the world's perspective - the God of Israel does not bow down to men - He demands that men bow down before Him.

And that his time is almost up.

The U.N. Human Rights Council: No Better for Obama's Engagement - The Heritage Foundation