Moral Clarity and the Fall of the Wall

The twentieth anniversary of the fall of the Berlin Wall is an important landmark in human history. That wall, one of history's most heinous symbols of oppression, stood as a physical reminder of Communism's essence. The Wall was not built to keep invaders out, but to imprison a people within. In the singular interest of avoiding its own evacuation, the Soviet-backed government of the German Democratic Republic erected that wall and murdered those who attempted to cross it.

The passage of time is so swift that today's younger Americans are only dimly aware of the Wall, if at all. Their historical horizons collapse anything before their birth into ancient history. As with all historical losses, this one is costly. We must remember the Wall in all of its ugliness and murderousness. We must remember the gun towers and barbed wire, the broken glass and mines, the sight of human beings shot dead simply for seeking to flee a regime that crushed the human spirit. 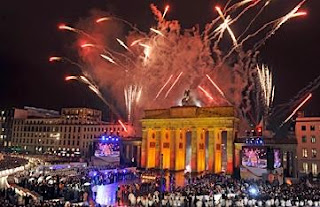 History is never uncomplicated. Two decades after the fall of the Berlin Wall, several insights come into focus. We now know that the Communist regimes of the Eastern Bloc had for some time been losing confidence and the will to maintain order by any and all means. The epic economic and social failures of Marxism were impossible to deny. Too many eyes had seen over the Wall, and denial of the obvious grew ever more costly.

The aged leaders of the Soviet Union maintained a steady face, but their own younger leaders had lost hope in the system. The Communist regimes were, quite literally, losing steam. The amazing fact to realize now is that so few in the West seemed to see this.

Writing in The Wall Street Journal, Anthony R. Dolan, a former speech writer for President Ronald Reagan, offers keen insights in "Four Little Words," published in today's edition. The article takes us into the life of the Reagan administration as President Reagan prepared to deliver a speech at the Berlin Wall in July of 1987. Reagan's speech at the Berlin Wall is rightly remembered for four words he addressed directly to Soviet leader Mikhail Gorbachev, "Tear down this wall."

As Dolan recalls, those words sent shock waves through the White House and the State Department long before the world heard the President speak them. Powerful forces within the Administration warned that the words would "embarrass" Gorbachev. But Reagan knew his moment, and he was fueled by a moral clarity that was missing in others. Previous administrations had sought to avoid the kind of ultimatum of history that President Reagan delivered at the Wall.

Reagan had the carefully arrived at view that criminal regimes were different, that their whole way of looking at the world was inverted, that they saw acts of conciliation as weakness, and that rather than making nice in return they felt an inner compulsion to exploit this perceived weakness by engaging in more acts of aggression. All this confirmed the criminal mind's abiding conviction in its own omniscience and sovereignty, and its right to rule and victimize others.

Accordingly, Reagan spoke formally and repeatedly of deploying against criminal regimes the one weapon they fear more than military or economic sanction: the publicly-spoken truth about their moral absurdity, their ontological weakness. This was the sort of moral confrontation, as countless dissidents and resisters have noted, that makes these regimes conciliatory, precisely because it heartens those whom they fear most—their own oppressed people. Reagan's understanding that rhetorical confrontation causes geopolitical conciliation led in no small part to the wall's collapse 20 years ago today.

Dolan's article is important at many levels -- not least for revealing the divisions within the American government -- but his focus on moral clarity in the face of Communist oppression and criminality is both refreshing and important. Reagan understood that certain regimes and empires were -- remember the word? -- evil.

This is not to suggest that any government or political structure is perfect. Nevertheless, the Communist regimes that were so clearly exposed by the Berlin Wall had given themselves over to criminality and evil. President Reagan saw this when others, trained to see the world as diplomats, failed to see. Reagan saw himself as stating the obvious, and hoped to give others courage to see and say the same.

There are two great moral dangers we must always resist: The first is declaring moral clarity before the truth is known. The second is refusing to acknowledge a moral clarity that is right before our eyes. These days, the second appears to be the greater temptation.

We dare not forget the day the Wall fell, not the moral clarity that brought it down.

Does the Bible support Communism? - GotQuestions.org