WARNING: Israel in Danger of Being Blindsided by Two New Grave Threats

On October 6, 1973, Israel was hit by a massive and devastating surprise attack on Yom Kippur, the holiest day in Judaism. The warning signs that Israel’s enemies were gearing up to deal the Jewish State a death blow were there. Her leaders simply didn’t properly assess, interpret and respond to them. By God’s grace, Israel was saved from the brink of utter ruination. But it was close, and painful.

Thirty-six years later, Israel is once again in grave danger. By Iran’s nuclear threat, to be sure. But Israel is actually in danger of being blindsided by two new threats.

The first threat is the real and growing possibility that the United Nations will shift the nuclear spotlight away from Iran and on to Israel in an effort to force Jerusalem to disclose and dismantle its alleged nuclear weapons and join the Nuclear Non-Proliferation Treaty (NPT). Israel does not openly acknowledge having atomic weapons. But the U.N. Security Council could pass a resolution forcing Israel to allow international inspectors in. If Israel refused to comply, she could be subject to diplomatic isolation, crippling economic sanctions, and even international enforcement (that is, a coalition of nations ready to go to war over the issue, just as the U.S. led a coalition in 2003 to force Iraq to comply with U.N. resolutions regarding weapons of mass destruction.)

This is a scenario I’ve been warning about for years, including in my 2005 political thriller, The Ezekiel Option. But this is no longer fiction. IAEA chief Mohammed ElBaradei publicly raised this as a serious possibility yesterday, saying,

“Israel is the number one threat to the Middle East given the nuclear arms it possesses.”

The Wall Street Journal columnist Bret Stephens also has a must-read column in today’s paper explaining how this scenario could come to pass in the not-too-distant future. 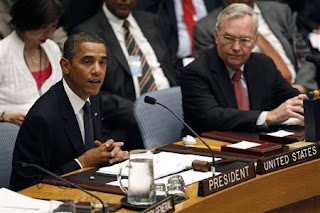 Keep in mind: President Obama is making global nuclear disarmament his top foreign policy priority. He chaired a U.N. Security Council meeting last week to push this agenda. It is increasingly conceivable that he will try to force Israel to “play by the same rules” as everyone else and disarm unilaterally, even though Israel has never threatened to “annihilate” a neighbor.

As I imagine in The Ezekiel Option, such a resolution against Israel could be introduced into the U.N. by Russia. The coalition against Israel could be led by Russia and Iran. Should this happen, we could begin to see the prophecies of Ezekiel 38-39 come to pass in fairly short order. While it is too early to conclude that is what is happening now, it is not too early to intensify our prayers for the peace of Jerusalem, according to Psalm 122:6.

The second threat is the real and growing possibility that the world will unilaterally create and recognize a Palestinian State, not through negotiations with Israel but by fiat.

World leaders have been trying to engineer a “comprehensive” final peace agreement for decades. The Palestinians rejected a generous final peace offer by then-Israeli PM Ehud Barak in 2000 at Camp David (too generous, in my view). Then, Yasser Arafat unleashed the “Second Intifada” and a horrific wave of suicide bombings throughout Israel. The Palestinians then rejected repeated peace offers by then-Israeli PM Ehud Olmert (also too generous). Then, Hamas fired thousands of rockets and mortars at southern Israel until Operation Cast Lead crushed most of the Hamas activities in January of 2009.

Rather than be impatient with the Palestinian leadership, however, for consistently rejecting sweeping Israeli peace proposals, the world increasingly wants to force Israel to make deeper and deeper concessions. With his Cairo and U.N. General Assembly speeches, President Obama has taken the lead on this effort. He is demanding Israel return to its pre-1967 borders, divide Jerusalem and allow the Palestinians to have a state with contiguous borders (thus cutting Israel proper in two).

Now come a growing number of signs that world leaders are preparing to impose a final solution to the Israeli-Palestinian impasse, perhaps based on Palestinian Prime Minister Fayyad’s new two-year plan to create a viable Palestinian state.

“During July, the EU’s Javier Solana lectured in London and said that if the peace process was going nowhere, the international community should consider recognizing a Palestinian state under a UN resolution even without Israel’s consent,” reports Dr. Dore Gold, the former Israeli Ambassador to the U.N.

"[Solana] called for a fixed deadline for future negotiations. The Fayyad Plan could prepare the groundwork for such international action by providing the Palestinians with the main legal preconditions for recognition: the exercise of effective governmental control, the capacity to engage in foreign relations, and a defined territory.

The last criteria for statehood is the most problematic. According to Solana, after the UN Security Council proclaims the adoption of a two-state solution, it will also adopt further follow-up resolutions regarding the highly contentious issues of refugees, Jerusalem and borders.

In short, the Solana plan is an imposed solution, using the UN Security Council as its main instrument, which will decide the issue of Israel’s future borders and those of the Palestinian state.”