Recently I started getting a flurry of calls and emails asking me why I had decided to endorse the Gap Theory of Creation. These messages caught me by surprise because I have never believed in that theory. In fact, almost every time I have ever spoken or written about Creation, I have made it a point to denounce that theory. 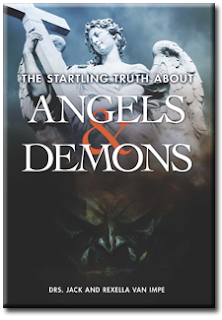 It didn't take me long to trace down the origin of the rumor. I discovered that the well known Bible Prophecy teacher, Jack Van Impe — a man I have always respected — recently released a video entitled "The Startling Truth About Angels and Demons." In that video he states that I am a person who has endorsed the Gap Theory.

I contacted Mr. Van Impe immediately by email and informed him that his information was incorrect. He responded through one of his assistants and apologized for the error, asking my forgiveness for the misinformation. He certainly has my forgiveness. But the problem is that the information is now out there on a video that will be distributed worldwide.

Because I consider this issue to be so important, I want to emphasize once again in writing that I am a person who believes the Bible literally, and therefore I believe that the earth and all the universe was created 6,000 years ago in six literal days, just as the account in the book of Genesis says.

Some of you reading this may not even be aware of what the Gap Theory is all about. Although there were forms of the Gap Theory before the 19th Century, it was during the latter half of that century that the theory became popular as a way of accommodating the story of creation to the Darwinian assumptions of modern science, particularly the idea that the earth must be billions of years old.

The theory postulates that there is a gap of billions of years between the first two verses of Genesis. The first verse supposedly describes the creation of the original earth. It is then argued that the original earth became "formless and void" through the rebellion of Satan and his angels. During the gap, animals supposedly lived and died, and some even argue that a soulless race of people lived and died during this time. Sometime during this gap there was a worldwide flood that is referred to as "Lucifer's Flood." It was this flood, not the Noahic Flood, that supposedly laid down the fossil record. After billions of years God reconstructed the earth in six literal days. That reconstruction supposedly begins with verse three of Genesis where God is portrayed as creating light. This is why the Gap Theory is often called "The Ruin-Reconstruction Theory."

But I cannot endorse it for a number of reasons. Let me just mention a few.

First, I think it reads into the text something that just isn't there. I believe a natural reading of the first five verses of Genesis is that on the first day of creation, God created the heavens and the earth and then began the process of fine-tuning His creation by creating light. When verse two refers to the earth as "formless and void," all it is saying is that after its creation on the first day, the earth was like a pile of clay waiting to be shaped.

Another problem with the Gap Theory is that it introduces death into the world before the fall of Adam and Eve. The Bible teaches there was no death before Adam and Eve sinned.

A third point I would make is that I don't believe it is necessary to use something like the Gap Theory or the Day-Age Theory to explain what appears to be the ancient age of the earth. That's because special creation always carries with it the appearance of age. If, for example, I were to create a full grown man and then introduced him to you and claimed that I created him 15 minutes ago, you would say, "Oh no! He's at least 30 years old." The same would be true of the instant creation of an animal or a plant. This point was illustrated in the very first miracle Jesus performed at the wedding feast in Cana of Galilee when He turned the water into wine. The creation of wine takes an aging process. But Jesus created it instantly, and it carried with it the appearance of age.

The Integrity of God's Word

We need to stop playing games with the Creation story. If it is not reliable, then what part of the Bible can we believe? The Day-Age folks spiritualize it. But, if it is to be spiritualized, then where do we stop spiritualizing? The Gap Theory folks try to prop-up the story by inventing a gap that doesn't exist. I think the best approach is to accept by faith the plain sense meaning.

The reason this issue is so important is because the integrity of God's Word is at stake.

What is the Gap Theory? Did anything happen between Genesis 1:1 and 1:2? - GotQuestions.org

Is There a Time Gap in Genesis? - The Berean Call (Dave Hunt)

Did Jesus say He created in six days? - Answers in Genesis (Ken Ham)