The Company of Evildoers and the Shadow of Judgment

The man who occupies the Oval Office (OOO) appears to have taken a policy course to destroy the United States by giving in to its enemies. He has scuttled an agreement to deploy defensive missile systems with Poland and the Czech Republic to appease Russia. He will not meet with the Dalai Lama to please China. In his landmark Cairo speech, He tried to revise history to give Islam a better self-esteem about its murderous and sordid past. He has appeased dictators in Cuba and Venezuela by demanding that the ousted self-proclaimed president for life in Honduras be immediately restored. And he has appeased Europe by yielding US economic sovereignty to the International Monetary Fund. 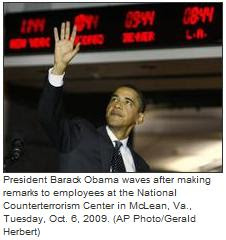 The results of these inimical foreign policy strategies are alarming. Russia and China continue to arm Islamic terrorists with weapons, technology and assistance. Venezuela is entering into nuclear agreements with Russia. And Russia, China and the Islamic world are demanding the dollar be replaced with another world currency. Their vassal in the Middle East, Iran, is on the verge of having nuclear weapons. Islam continues to press for the destruction of America as evidenced by the numerous recent arrests of terrorist plotting to blow up public transportation and financial centers, and the death toll in Afghanistan. No wonder Libya's Moammar Gadhafi thinks OOO should be president for life.

But domestic policy is not any better. This White House has scuttled the Constitution by taking over the financial and automobile industries. It intends to completely do away with private enterprise by establishing socialized medicine complete with tax payer funded abortions, programs that support and promote homosexuality, programs that require senior citizens to receive "end of life” counseling every five years, a tribunal that will decide who receives what type of treatment and will garnish the wages of taxpayers or even put them in jail if they do not participate in this unconstitutional scheme. No wonder Cuba's Fidel Castro thinks OOO should be president for life.

America lost its moral bearing long before this current White House took office. But this administration's penchant to side with the evildoers will ultimately bring upon Americans an unintended result.

Because of its reverence for God, America has been traditionally blessed as a nation. But in Jeremiah 6:25, the Lord says of such a country,

"Your iniquities have turned away these things, and your sins have withheld good things from you."

"Also I set watchmen over you, saying 'Hearken to the sound of the trumpet.' But they said, 'We will not hearken.'"

We must stand strong in Christ as the shadow of judgment lengthens.

Secret Moves To Break The Dollar - The Independent