Red-Letter Christians: Neo-Marxism in the Church?

In many Bibles, all the words of Jesus are in red. There is nothing wrong with that. But something is wrong when Leftist Christians or so-called Christians want to mute the words of Paul and other writers and only follow Jesus' words. They call themselves "red-letter Christians."

They feel it is convenient to blot out the words of Paul on homosexuality and focus in on the good deeds Jesus talks about. Most are pacifists who reject an "eye for an eye" (Leviticus 24:19-20). They focus on Jesus' words about helping the poor, ministering to "the least of these" (Matthew 25:40), loving our enemies, etc. That justifies abandoning hundreds, even thousands of condemning verses in the Bible they choose to wish away. That makes homosexuality OK and war wrong! And remember, Paul and the others in the Bible represent Jesus' words. They were His spokesmen.

Some who believe this way practice a form of neo-Marxism and others would call it "Christian Marxism" - an oxymoron if there ever was one. They note that the early church shared everything (socialism). A close cousin to this is "liberation theology."

Those who are high profile in this movement include Jim Wallis, Tony Campolo, Brian McLaren and his Emergent bunch, and the National Council of Churches. Jim Wallis says,

"In those red letters, Jesus calls us away from the consumerist values that dominate contemporary American consciousness."

Translate that to mean he loathes capitalism and opts for socialism and/or communism.

"Jesus calls us to be merciful, which has strong implications for how we think about capital punishment. When Jesus tells us to love our enemies, He probably means we shouldn't kill them. Most important, if we take Jesus seriously, we will realize that meeting the needs of the poor is a primary responsibility for His followers. Ghandi once said that everybody in the world knows what Jesus was teaching in those verses except Christians."

To your average evangelical, the words of Ghandi are meaningless. 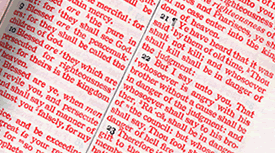 Red-letter Christians feel evangelicals spend far too much time worrying about abortion and homosexuality. Wallis and Campolo make the college circuit and get standing ovations from young people who are seeing them as newfound gurus. Red-letter Christians champion "social justice," the cause of illegal immigrants, environmentalism, high taxes, discrimination issues, socialized medicine, and getting rid of the death penalty. They are first to stand in line to play the "blame America" game.

As David Noebel of Summit Ministries writes about Wallis,

"Wallis and his Sojourners' community believe Castro, Hugo Chavez, Daniel Ortega, and the other revolutionary forces are the Communist paradises the U.S. needs to emulate in order to establish 'social justice.'"

Noebel emphasizes the startling and frightening fact that Wallis is Obama's spiritual advisor.

Ronald Nash in his book, Why the Left Is Not Right, says,

"Wallis was pro-Viet Cong and gloried in America's defeat in Vietnam. Wallis said, 'I don't know how else to express the quiet emotion that rushed through me when the news reports showed that the U.S. had finally been defeated in Vietnam.'"

But he said not a word about the blood baths that followed.

The issues you will never hear red-letter Christians talking about include winning the lost, the lateness of the hour, or sin and repentance. Their mantra is peace, yet they do not understand that only Jesus ruling from Jerusalem will bring peace to this planet. They would scoff at that and say peace would be better accomplished if they saved the planet with their works based on the red letters of Jesus. And their understanding of the peace of God is minimal.

As Mark Tooley of the Institute for Religion and Democracy writes,

"These people only criticize the U.S. and Israel in its human rights critiques, while remaining largely silent about monstrous regimes. They focus on America's supposed mistreatment of Indians, about slavery, and the internment of Japanese-Americans during World War II. But they will never talk about the Holocaust."

You will also note they don't talk about the butchery of Mao, Stalin, Pol Pot, Saddam Hussein, or Kim Jong IL.

Red-letter Christians join the chorus of those who believe in a utopia with no wanting or war. Yes, that will come someday, but not the way they think. This could come as a shock to them just because they have little to no regard for other parts of the Bible. They have almost created a new meaning for the term "biblical illiteracy."

It is also tragic that these folks are frequently called "the evangelical Left." They don't have even 1% of evangelical theology in a single bone in their body. They cherry-pick the verses they like, almost exclusively the red letters of Jesus.

Also on a sad note, the National Association of Evangelicals (NAE) is promoting a Leftist conference featuring Jim Wallis October 21. This was announced in their "NAE Update" received today, October 5, by e-mail. Tooley's more Mainline Protestant Institute for Religion and Democracy takes a more righteous stand against Leftist causes than does the NAE.

What are Red-Letter Christians? - GotQuestions.org

Christians and Social Revolution - Grace to You (John MacArthur)