The clashes between Palestinians and Israeli police in Jerusalem this past week are the clearest indication that the Arabs will never accept a Jewish state.

Ikram al-Sabri, a member of the Islamic High Council of “Palestine,” was arrested and it was thought that he had involvement in the incitement of Palestinians on the Temple Mount.

One of the most glaring omissions from media reports is the fact of Arab intransigence. The Palestinians have such a deep hatred of the Israelis that they can’t focus on anything constructive. It is infuriating and sad at the same time. The Arabs as a whole are such emotional people that they have let chance after chance for peace slip through their fingers.

Take the Temple Mount, for instance. Known as Haram al-Sharif to the Arabs, who believe the prophet Muhammad visited the area, the compound is rich with history. The area, of course, is known in the Bible as the threshing floor that David purchased, and the place where Abraham was prepared to sacrifice Isaac — Mount Moriah.

So the place has history.

In 2000, Ariel Sharon visited the Temple Mount and so enraged Palestinians — with his mere presence — that the “Second Intifada,” a Palestinian-led violence movement cheered on by Yasser Arafat’s clapping, blood-soaked hands, erupted.

In the recent protests, in which 18 policeman were injured along with 15 protesters, one Palestinian complained that it doesn’t matter what his people do; the Israelis control the area and can decide to bar Arabs from praying at the site.

Not when I’ve been there. Imagine being a pilgrim from abroad and your chief goal is to visit the Temple Mount. You approach one of the huge, green wooden doors manned by police. You are told the area is closed to visitors, yet thousands of Palestinians stream in and out.

I’ve managed two visits; the second one was very frustrating, as I strolled the plaza area between the Al-Aksa Mosque and the golden Dome of the Rock. Looking down in anticipation of seeing the ancient paving stones that provided a path for the Lord and His disciples, I was disgusted to see them being pulled up, replaced with new stones. The Palestinians never miss an opportunity to erase Jewish history from Jerusalem.

They also believe the “Al-Aksa Mosque” is a mosque, when in fact it was a Byzantine church hundreds of years before Muhammad’s alleged (and undocumented) visit.

What I’m trying to say is that the Muslims, as they do in every other place, believe that Jerusalem and in particular the Temple Mount belong to Allah. In other words, Dar-al-Islam. If any such territory is Dar-al-Harb (the House of the Infidel), such as Milwaukee, or my house, or west Jerusalem, then said territory must be conquered for Allah. 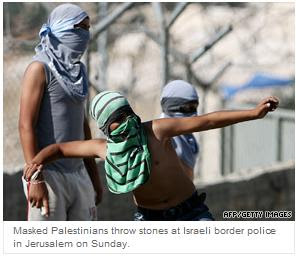 The riots in Jerusalem are simply the product of an angry, irrational people who hate Jews and Christians. In 1990, a huge protest on the Mount attracted international coverage, as Palestinians dropped rocks off the Temple Mount onto worshippers at the Western Wall. You see, the Palestinians do such things because they refuse to get along. It is a supremely arrogant mindset that is difficult to process. This is one explanation for why media figures fawn over the Arabs and sneer at the Jews. It’s self-preservation.

Just know that when you hear a news account from Israel, you are probably being lied to. I recently reviewed the book Muslim Mafia (by David Gaubatz and Paul Sperry) for WorldNetDaily. Gaubatz made the fascinating point that in his early dealings with Muslims in Washington D.C., he had been fooled by their claims of moderation.

In fact, he now calls them “terrorists in suits” and the description is dead-on (pardon the pun). He also says that these front groups for terrorists will tell bald-faced lies to the American public and politicians. In fact, Bill Clinton and George W. Bush both hosted such types often.

So when you hear that Israel did something to push the Palestinians to the breaking point … no, they didn’t. It simply means that the Palestinian Authority, working in conjunction with Hamas, etc., has merely created more Marxist-type propaganda to demonize Israel.

Think about this: if you were a small kid on a playground and you encountered a dozen thuggish kids … would you provoke them? Such is the case with Israel. A few million Jews have no interest in stirring up hundreds of millions of Muslims. Why would they do it? Because they haven’t died enough in previous persecutions?

This is simple logic that helps us understand the real story in the Middle East, as it relates to the Arab-Israeli conflict.

I will say this: incidents like the recent protests in east Jerusalem are all pushing us in the direction of Zechariah’s prophecies, which tell us quite clearly that one day, gentiles will have had their final fill of the Jews. And they will attack.

The attackers will be destroyed, because the Lord keeps His promises. He also tells us elsewhere that He takes no pleasure in their deaths. It is a tragedy.

Let us pray for all the people in that volatile region. Including the Palestinians, that they will see the truth.

It's the End of the World as We Know It (and I Feel Fine): How to stop worrying and learn to love these End Times - Jim Fletcher