Of Wicked Leadership, Olympics and War

Our church prayed for the daughter of one of our congregation who is being deployed to Afghanistan this week. She is a single mother, leaving behind a beautiful daughter, who my wife led to the Lord. Stephanie is really confused and upset that her mother has to go away and fight in the war. Yes, of course, her mother is part of a volunteer army of American patriots who chose on her own to join up and be a good soldier, a good American. But she will be going away now for who knows how long. And I pray for Stephanie and the many, many other children who will be left behind by their mothers who have to go off to war. It just doesn't seem right that mothers and children be separated like that. 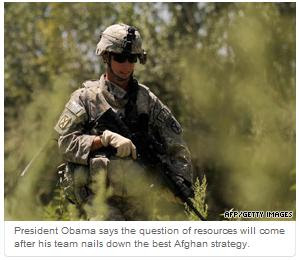 NATO Commander Stanley McChrystal said in a September report that was leaked to the Washington Post that "the task in Afghanistan is being made more difficult by rampant Afghan government corruption and a hesitation by civilians to ally themselves with the authorities for fear that the Taliban might ultimately win." The Post said that McChrystal pressured the administration for a swift commitment by warning that if the Taliban is not driven back by coalition forces within a year then the war will be unwinnable. In response, the man who occupies the Oval Office said he would strategize for a few weeks. Meantime, the war is becoming more deadly with the loss of over 50 US soldiers since the report was released.

It appears that more energy was expended by the White House in a failed attempt to lobby the International Olympic Committee to select Chicago as its site in 2016. Intense pressure was put on by the First Lady and OOO in separate flights to Copenhagen. And details are surfacing that White House cronies in Chicago stood to benefit. All the while, troops are dying in Afghanistan because of a lack of direction and commitment by the White House.

"Righteousness exalts a nation: but sin is a reproach to any people."

Is it a sin to pursue lining the pockets of your political cronies while lives are being wasted for a lack of direction? I am sure America's sons and daughters have the answer.