What Temple? Fatah Says 'Only a Muslim Holy Site'

JERUSALEM – The Temple Mount does not exist alongside the Western Wall, and neither Jews nor Christians should be allowed to pray on the Mount site, Dimitri Diliani, the spokesman for Fatah in Jerusalem, told WND in an interview.

Fatah, once named by the U.S. as a Mideast "peace partner," is the party led by Palestinian Authority President Mahmoud Abbas. Diliani spoke hours after Fatah and PA officials were accused of inciting a riot on the Temple Mount, claiming Jews were threatening the site.

"Don't use the term Temple Mount," Diliani lectured WND. "It doesn't exist. I don't know where it is. I cannot see any Temple. Can you? No one can find any trace of it. The area you refer to is only a Muslim holy site."

The PA, though, has found evidence of Judaism's historic connection to the Mount – the holiest site in Judaism. The Waqf, the Islamic custodians of the Mount, conducted an unsupervised excavation on the site in 1997. At that time, the Waqf, working under the guidance of the PA, ultimately were caught by Israeli authorities disposing truckloads of Mount dirt that contained Jewish Temple artifacts. To this day, Israeli archeologists are still sifting through the large amount of dirt, in which scores of Jewish Temple relics were found.

Diliani did not deny Fatah and the PA were involved in yesterday's Temple Mount riots.

"Palestinian political factions, including Fatah, are firm on defending the political, national and religious rights of the Palestinian people," Diliani said, "and it's evident now we will continue defending the Al Aqsa Mosque as well as our rights in Jerusalem as a whole."

Diliani did not specify exactly which Jews were threatening the Temple Mount.

Yesterday, Israeli security forces released from custody Jerusalem's senior Fatah official, Khatem Abed Al-Kadr, who had been detained on suspicion of inciting riots. Al-Kadr was released on condition that he not enter the Old City of Jerusalem. He also must remain at least 250 meters from the area gates for 15 days. 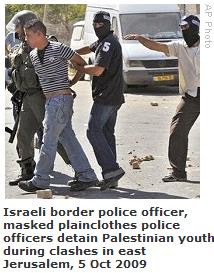 Yesterday's riots featured about 150 Palestinian protesters hurling rocks and bottles at Israeli police after Israel barred men between the ages of 18 and 45 from ascending the site that day. The order came after the PA and an Al Aqsa Mosque activist group, the Islamic Movement, called on Arabs to ascend the site yesterday to defend it against "Jewish threats."

The PA's involvement with the Mount riots come after the Palestinian public has expressed disapproval with a decision by Abbas to call for the delay of a U.N. Human Rights Council vote regarding a U.N. report that accused both Israel and Hamas of war crimes during the Jewish state's defensive war in Gaza in December and January.

That U.N. report, authored by South African judge Richard Goldstone, has been slammed here as anti-Israel. The report equates Israel, which worked to minimize civilian casualties in Gaza, to Hamas, a terrorist organization that utilized civilians as human shields and fired rockets at Jewish population centers from Palestinian hospitals and apartment buildings.

Israeli security officials, speaking with WND, said Abbas likely was using the Temple Mount clashes to incite against Israel and deflect Palestinian outcry, including from Hamas, stemming from his agreement to delay the U.N. vote.

During his speech to the U.N. General Assembly days before the Mount riots last week, Obama used strongly worded language to call for the creation of a "viable, independent Palestinian state with contiguous territory that ends the occupation that began in 1967."