Should Christians, Muslims and Jews Unite?

Everywhere we turn these days, Muslims, Christians and Jews seem to be making calls for interfaith unity. The spirit of the age seems to be of the opinion that to be true "peacemakers" we must join together for various prayer initiates or justice-related issues. On the surface, these efforts have a certain appeal. Religious pluralism is after all the new, if unspoken global religion. I recently reported on a meeting that took place this year in Istanbul between three rabbis representing the Jewish Sanhedrin and Turkish Muslim leader, Adnan Oktar, who also uses the pseudonym Harun Yahya. The emphasis of the article was on the rebuilding the Jewish temple. After the article was published, the rabbis expressed to me that that while the emphasis of the article was on the rebuilding of the Jewish temple, it did not give enough emphasis to the greater reason for their meeting with Mr. Oktar. 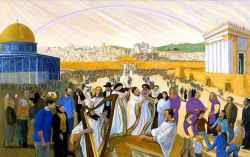 According to the rabbis, the primary reason for befriending and working together with devout Muslims of good-will such as Mr. Oktar is to make a unified stand with righteous and devout gentiles against the increasing global tide of secularism, materialism and unbelief. For the rabbis, this is an issue of justice and fostering peacemaking friendships. According to statements made on the official Sanhedrin website, it is only through such engagement that Jews and Muslims can help bring the world back to a life of devotion to their creator. After the meeting with Mr. Oktar, the following statement appeared on their website which seems to summarize their view:

Our struggle should be against denial of truth, especially against atheism, not against other believers. And even that struggle should be one emphasizing kindness and compassion knowing that most people today have lost their way.

Also emphasized was the need to work against intereligious conflict:

Today, many ideological struggles continue to divide the world. However, the major ideological conflict is not between religions, but between people who believe in truth, in G-d's existence and in the need for cooperation, on the one hand, and on the other hand, people who deny truth, who deny holiness: – the unbelievers … This will be done by forming an alliance of all conscientious people, namely, the righteous among Christians and Muslims, along with devout Jews, who will come together and unite in this common cause.

Repeatedly expressed in their meeting with Mr. Oktar is the notion that Muslims, Christians and Jews all worship the same God. As part of this unified stand against unbelief, the statement also spoke of establishing a school that will study the sources of unbelief and work toward ways to overcome these various systems of thought:

Thus the first project which must be undertaken is investigation and teaching, a new center of learning and law: the founding a new university. The purpose of this university is to investigate the mistaken ideologies which are the source of denial of God and truth, and to develop ways to overcome them.

This idea that joining together with other religious groups will somehow bring about justice and peace is quickly becoming the prevailing wisdom of the age. But it is deeply unbiblical. In further conversations with the Sanhedrin rabbis, I was clear to emphasize to them that as good as this all may seem on the surface, it is actually in violation of the commandments that God has given to the Jewish people. After the Hebrews left Egypt and approached the Promised Land, through Moses, God gave them a set of laws that they were to abide by. One of the specific warnings and commands that God gave to the Jewish people was that they never make treaties, covenants or alliances with the various mixed peoples that surrounded what would come to be "Israel."

Many well-meaning Christians today are unaware that the biblical concept of "holiness" is derived from the word "separate." As such, commandments against inter-religious unity of almost any form are found throughout the Bible. Even into the New Testament, the Apostle Paul commanded the Christian community to remain separate from other religious groups:

Be ye not unequally yoked together with unbelievers … what agreement hath the temple of God with idols? … Therefore come out from among them, and be separate." (2 Corinthians 6:14)

As we approach the last days – a time when deception will be the rule and not the exception – obeying these principles is becoming increasingly nonnegotiable. But from the perspective of a growing number of prominent Christian leaders, such exclusivity, biblical or not, is to be utterly disregarded. Within the church today, there is an emergent universalist idea that in order to "heal the earth" and promote justice, Christians must embrace this trend toward inter-religious unity. Commandments to purposefully separate oneself from others are viewed as entirely outmoded and "unhelpful." As a result, this call to work together with people of other faiths has become a front-and-center issue.

While recently speaking at the Islamic Society of North America, Mega-Pastor Rick Warren very publicly called on Christians and Muslims to form interfaith coalitions to work against such issues as "prejudices and stereotypes." During the Islamic month of Ramadan this year, Pastor Brian Mclaren and many of his followers openly embraced and participated in this Islamic ritual fast, again in the name of "solidarity and neighborliness."

Recently, while speaking at the Islamic Society of North America conference, Warren stated, "You can disagree with someone without hating them, without being afraid of them." No one disagrees with this. The problem is not befriending Muslims, nor being neighborly. Nor is there any issue with mutually identifying with certain social issues.

The problem with the popular approach that Warren, Mclaren and others take is its very broad, loose and cavalier approach. But above all, it is naïve. While vague calls to unity always sound pleasant, as is often the case in scenarios such as this, the devil is always in the details. What do I mean?

If Warren had openly called on all Muslims to fight against such glaring injustices such as the slavery of hundreds of thousands of black Muslims in Mauritania by Arab Muslims, then I would have cheered him. If he had openly spoken about the ongoing genocide in Darfur, the righteous of the earth would have rejoiced. If only Warren had called on all American Muslims who love freedom and democracy to fight against anti-Semitism, anti-Zionism and the ongoing propaganda war against Israel. But forming "an alliance to combat stereotypes"?

Consider the reality: At last week's gathering of a couple thousand Muslims on Capitol Hill, there was not a single unified denunciation of the recent terrorist plots that were uncovered throughout the U.S. the very same week. Beyond the complete silence at the recent gathering of Muslims in our nation's Capitol, consider also that among Warren's co-speakers at the ISNA conference was Warrith Dean Umar, whose book "Judaiology" features the following statement:

[Jews] are an amazing people who can steal you blind as you watch. If you discover the theft, they can put you to sleep. If you wake up to them, they can put you back to sleep with mind games, tricks of fancy, smoke screens, and magic. Henry Ford almost uncovered them.

As I said, the devil is always in the details. While Warren used his open platform at the ISNA conference to declare his fight against the negative stereotyping of Muslims, the very same conference also gave an open platform to a disgusting racist, a brazen anti-Semite and supporter of violent jihad. While stereotyping is oftentimes unmerited, some stereotypes are in fact well-deserved. Christians are called to be as gentle as doves yes, but wise as well.

The next reason that the new lets-just-all-get-alongism needs to be publicly renounced by Christian leaders, again, is simply because it is unbiblical. In times past, this would have mattered to Christian shepherds. But far too many of today's adult-children shepherds act as if being "subversive" is more important than living according to the Scriptures.

Christians must make every effort to seek peace between religious groups. And, of course, believers must be at the forefront of fighting for genuine justice to be manifest in the here and now. But the notion that accomplishing this requires forging inter-religious alliances or unions is the exact opposite method of that which is prescribed in the Bible. I have seen formerly anti-Semitic Muslims full of hatred and violence become genuine men of peace who love the Jewish people. But apart from embracing the gospel, I have never seen this take place. Christians are called to transform the world through preaching the Gospel, not through forging interfaith alliances.

In the years to come, as the darkness increases and the call continues to go forth from prominent leaders from the Christian, Jewish and Muslim communities to "join together," as the notion is expressed that we all worship the same God, it is imperative that Christians determine now exactly where they stand on these issues.

IS ALLAH THE GOD OF BIBLE? - Answering Islam

A Time of Departing - Ray Yungen