TEL AVIV – Today's Islamic riots on the Temple Mount may be more about internal Palestinian politics and regional negotiation strategy and less about any so-called Jewish threat to the holy site.

Earlier today, at least 25 Arabs and three Israeli policemen were wounded in clashes that saw Arab youth hurl stones, paint and at least one fire bomb at riot gear-clad security forces here. It was the latest in a series of disturbances on the Mount over the past six weeks.

The unrest, however, is not spontaneous and is not occurring in a vacuum.

The riots are being directly incited by the Palestinian Authority, whose official media outlets and institutions have been stoking Arab flames the past few weeks by claiming right-wing extremist Jews are attempting to threaten the Al Aqsa mosque – a decades-old blood libel that should be easily dismissible in light of heavy Israeli restrictions on Jews and Christians from ascending the Mount during most hours of the day.

Muslims, on the other hand, are usually free to access the site at any time. Israeli police also ban all non-Muslims from praying on the site.

Official PA television and radio have been calling on Muslims to "storm" the Al Aqsa Mosque to "protect" the site from "Jewish threat."

Today's clashes had all the trappings of a pre-planned PA campaign. The violence began when Israeli officers attempted to accompany a group of tourists onto the mount. The Jerusalem police revealed today they have film of several Muslim youth preparing the unrest by gathering rocks and pouring oil onto the ground to foil security forces. 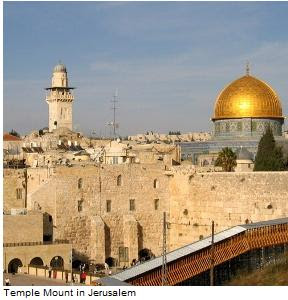 Speaking to WND, Dimitri Diliani, the spokesman for PA President Mahmoud Abbas' Fatah party in Jerusalem, did not deny his group's involvement in recent riots.

"Palestinian political factions, including Fatah, are firm on defending the political, national and religious rights of the Palestinian people," Diliani said, "and it's evident now we will continue defending the Al Aqsa Mosque as well as our rights in Jerusalem as a whole."

Nabil Abu Rdeneh, a spokesperson for the PA, said of today's clashes:

"Jerusalem is a red line that Israel should not cross."

History has shown that riots emanating from the Temple Mount have been pre-planned as part of a larger Palestinian nationalist strategy. For example, in September 2000, the Palestinians started their intifada by throwing stones at Jewish worshipers after then-candidate for prime minister Ariel Sharon visited the Mount. At first, the Palestinians claimed the stone-throwing riots were spontaneous. Later, top PA officials, including Palestinian Liberation Organization leader Yasser Arafat and his deputy, Marwan Barghouti, admitted the Temple Mount clashes were planned.

So why today's clashes?

First, consider internal Palestinian politics. On Friday, Abbas announced he will forge ahead with new presidential and parliamentary elections on Jan. 24 since he was not able to reach a unity deal with his Hamas rivals. Abbas has been dreading such a decision, fearing he may lose to the more popular Hamas. He only agreed to new elections – which he had been delaying now for almost a year – after Hamas threatened to unilaterally hold its own elections in the Gaza Strip.

Abbas' popularity has been slipping in recent years, according to multiple polls. But perhaps the largest popular revolt he faced started playing itself out earlier this month when the Palestinian leader called for the delay of a U.N. Human Rights Council vote regarding a U.N. report that accused both Israel and Hamas of war crimes during the Jewish state's defensive war in Gaza in December and January. That decision, reportedly made under heavy U.S. pressure, prompted street protests in the West Bank and Gaza Strip. Palestinians were filmed throwing their shoes at portraits of Abbas – a sign of disrespect in the Muslim world.

Facing internal criticism, including from many within his own Fatah party, Abbas eventually rescinded his decision and urged the U.N. to push ahead with the vote. The Palestinian leader's popularity, however, clearly took a major hit.

What better way to change the topic on the Palestinian street than for Abbas' PA to incite clashes against Israel regarding so-called Jewish threats to the Al Aqsa Mosque – the one issue that never fails to spark Palestinian fury.

There are other issues at play. The riots actually began last month, immediately following a three-way meeting at the U.S. General Assembly between Prime Minister Benjamin Netanyahu, President Obama and the PA's Abbas. Obama had hoped the meeting would initiate Israeli-Palestinian negotiations aimed at creating a Palestinian state within two years.

During his speech to the G.A. days before the Mount riots, Obama used strongly worded language to call for the creation of a "viable, independent Palestinian state with contiguous territory that ends the occupation that began in 1967."

"Occupation that began in 1967" is a specific reference to the lands Israel retained after the Six-Day War of that year, particularly the West Bank and eastern Jerusalem, including the Temple Mount.

It seems the PA, emboldened by Obama's speech, may be using the riots as a pressure tactic to send a clear message to Israel: If negotiations do not create a state in the near future, expect another intifada. The PA under Arafat was notorious for negotiations on the one hand while leading a violent campaign against Israel on the other.

Already, some of Obama's policies have hardened Palestinian bargaining positions. Most notably, the PA is now demanding a complete halt to Jewish construction in the West Bank and eastern sections of Jerusalem in line with the U.S. president's same demand. The PA never before set a settlement freeze as a prerequisite for talks.