An Expert Says that Oil Supplies Are Running out Very Fast

According to a leading energy economist, the world is heading for a catastrophic energy crunch that could cripple a global economic recovery because most of the major oil fields in the world have passed their peak production.

Dr. Fatih Birol, the chief economist at the International Energy Agency in Paris, says most governments are oblivious to the fact that the oil on which modern civilization depends is running out faster than previously predicted and that global production is likely to peak in ten years, at least a decade before most governments had predicted. 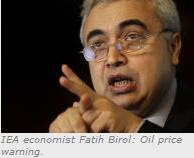 With the oil supplies of this world running out faster than what was previously thought, the stage is being set for the Middle East to move ahead quicker with its last days plan for this world which is found in Bible prophecy.

The discovery of oil in the early 1900's in the Middle East has played a key role in the policies and politics of both the Arab and Moslem world. The major suppliers of oil to the world, both the West and the far East, are the Middle Eastern states that have become rich and powerful because of this ever increasing need for oil products. With the report that these oil supplies are now running out, there is a very interesting development taking place in the Middle East.

Iraq which has a vast amount of oil under their surface has only extracted two percent of their total oil resource. As the other oil producing nations run out of oil, Iraq will become the greatest source for oil and thus they could well become the richest nation in the world, which fits a prophetic scenario for the end times. Iraq, Biblical Babylon, will be the headquarters for a one-world economic power that will be led by the Antichrist, Revelation 18.

This passage in Revelation reveals the economic power base will come into existence three and a half years before the return of Jesus Christ. The Messiah will return to destroy Babylon, modern day Iraq, as foretold in Bible prophecy, Isaiah 13-14, Jeremiah 50-51 and Revelation 16.

This report of oil running out faster than previously thought does indeed set the stage for Bible prophecy to be fulfilled.

Flood of jobs in Iraq - iAfrica.com