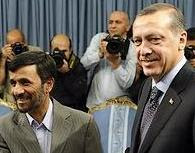 This is a nasty development in its own right. It also is consistent with biblical prophecy. Ezekiel 38-39 indicates that in the “last days” Iran and Turkey (“Persia” and “Gomer,” respectively) will form an alliance with each other, with Russia and a group of other nations hostile to Israel.

Ahmadinejad: 'The Zionist regime is a threat to all nations' - Jerusalem Post