Flashback: On November 23, 2004, Egyptian born Islamist Mohammed ElBaradei, who heads the United Nations International Atomic Energy Agency, the UN body that regulates and polices nuclear proliferation, said that he did not believe that the radical terrorist state of Iran was developing nuclear weapons. He told reporters,

After a late night visit to Bejing, Iran announced China would block any UN Security Council action against Iran.

Three days later on November 27th, 2004, CNN reported that talks between France, Germany and Great Britain with Iran over its nuclear program had reached a tentative agreement. Iran would stop spinning 20 centrifuges that could be used to develop weapons-grade uranium. This countered a previous agreement earlier in November that Iran would suspend all uranium enrichment. It hinged on the premise that Iran would not be referred to the UN Security Council if it were found that Iran had reneged on its promise to stop enriching uranium and that UN inspectors were restricted in where they could inspect Iran's nuclear plants. The ink was hardly dry on the agreement before Iran moved even more aggressively. 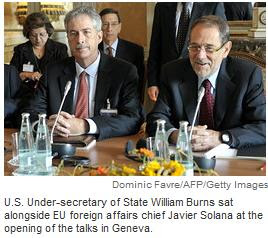 Nearly five years later today, Iran is still meeting with diplomats. And the objectives of the meeting being held in Geneva, Switzerland are the same: open up Iran's nuclear program to regular IAEA inspections, suspend the enrichment program, and make sure Iran's nuclear intentions are peaceful. The landscape, however, has changed. Iran now has two confirmed nuclear plants with reports emerging that there are up to five; Iran has missile technology capable of carrying a nuclear warhead to Israel; Iran's leaders have repeatedly threatened Israel with destruction. All the while, Russia and China have been Iran's protector on the UN Security Council.

Many have said that the definition of insanity is taking the same action repeatedly while expecting different results. The world leaders seem to be insanely blind to how Russia and Iran are developing a clear cut threat to the existence of Israel. Moreover, if they read their Bible, they would see how events are unfolding for the prophetic Gog/Magog war where Russia and Iran attack Israel in a colossal end times battle. In Ezekiel 38:16 the Lord says,

"And thou shalt come up against my people of Israel, as a cloud to cover the land; it shall be in the latter days, and I will bring thee against my land, that the heathen may know me, when I shall be sanctified in thee, O Gog, before their eyes."

US, Iran meet directly at nuclear talks in Geneva - AP

Dozens protest against negotiations with Iran in Geneva - Ynetnews