"We continue to call on Palestinians to end incitement against Israel, and we continue to emphasize that America does not accept the legitimacy of continued Israeli settlements." - Barack Obama to the United Nations General Assembly Sept. 23, 2009

The Nazis had a word for what Barack Obama declared in the United Nations General Assembly last week.

When a city or a district or a nation was "clean of Jews," it was pronounced "Judenrein."

The goal of the Nazis was, of course, for all of Europe to be cleansed of Jews – then the whole world.

Am I being harsh?

Not if you understand the nature of Obama's demand for an end to "Israeli settlements" in Judea, Samaria and even East Jerusalem.

Since Obama took office in January, the U.S. government has greatly increased pressure on Israel to halt any and all of the following:

Why would the U.S. government want to stop Jews from building homes and businesses in lands that have been under Israel's control for the last 42 years and a part of Israel's history for the last 3,000 years?

Because the U.S. government has pre-determined that these lands are going to be part of a future Palestinian state – one that will be conspicuously Jew-free. 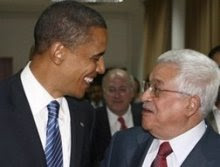 In other words, Barack Obama is in favor of an ethnic-cleansing operation – one that will eventually require the forcible removal of all Jews, no matter how long they have lived in these areas, no matter what they paid for their properties, no matter what.

That's because the monsters who control the Palestinian Authority, even the so-called "moderates," demand that all Jews leave. Jews will simply be unwelcome in this future Palestinian state. End of story. It's a non-negotiable demand.

Such an ethnic-cleansing operation has already been completed in the Gaza Strip. The Israeli government even enforced it, dismantling well-established and productive Jewish communities in the apparent misguided hopes the pressure to create more Jew-free territories would cease.

As I predicted then, it only increased the pressure from the United States, Europe and the Arab states to push for a Judenrein West Bank and East Jerusalem. In fact, Israel was immediately rewarded for its collaboration in the ethnic cleansing of all Jews from Gaza by a torrent of rocket attacks from the grateful Muslim "liberators" of the region – terrorist activity that has not ceased to this day.

Who am I to indict Barack Obama in such a way?

I am a Christian-American of Arabic ancestry – one whose grandparents fled the region because of the same kind of Islamic oppression and terror Israel faces today. Christians in the Middle East are growing scarcer by the day – even though it was the birthplace of the Christian messiah, Yeshua, and his Jewish disciples.

It is simply immoral to yield to the anti-Semitic hatred of the so-called "Palestinians" – a euphemism for Arabs who have never had their own country, don't have their own language, don't have their own unique culture, who are free to leave, but don't because they have been treated more than hospitably by their Jewish hosts for the last 42 years. Anyone who does so, Barack Hussein Obama included, should be considered a collaborator in ethnic cleansing and, its ultimate goal, genocide.

As an American, I want to state categorically I oppose this plan.

Barack Obama doesn't speak for me.

I believe Israel – all of Israel – belongs to the Jews. By definition, it is a Jewish homeland. Unlike its enemies, Israel has always embraced non-Jews within its borders – extending to them full citizenship rights including representation in its legislature.

It would seem to me that's the kind of government the West should be supporting. Instead, Obama seeks to reward those who insist on a Jew-free Judea.

Do we ever learn from history?

Haven't we learned this is the road to holocaust?

I know Americans have their own problems with Obama, but why are we sitting around quietly while he embraces policies that would reduce Israel to Auschwitz borders?

It's this simple: If ethnic cleansing is wrong, so are Obama's policies in the Middle East.

Israel’s PM Netanyahu's brilliant speech at the U.N.: "Have you no decency? Have you no shame?" - FLAME

Fatah to Abbas: no talks without settlement freeze - AP